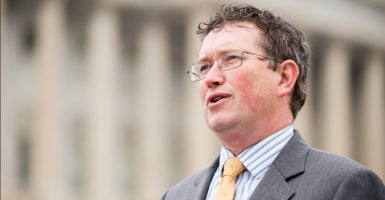 Rep. Thomas Massie, R-Ky., has introduced his bill to repeal the 1990 Gun-Free School Zones Act the first week of Congress in each term he has served. (Photo: Bill Clark/CQ Roll Call/Newscom)

Schools would be better protected from mass shootings if federal legislation enacted in 1990 that bans guns from school zones is repealed, a Kentucky congressman says.

“I have used the statistic on ‘Meet the Press’ Sunday that 98 percent of mass public shootings happen in gun-free zones, and I believe that we should put our children in the category of the 2 percent, instead of the 98 percent,” Rep. Thomas Massie, R-Ky., told The Daily Signal in a phone interview Thursday. “We should put them in the category which is much less likely for them to be engaged by a shooter.”

The Crime Prevention Research Center found that from the 1950s through July 10, 2016, 98.4 percent of mass shootings have happened in gun-free zones, The Blaze reported.

Massie, who was first elected to the House in 2012, says he has introduced his repeal bill the first week of Congress of each term he has served and says it would help solve the school shooting epidemic.

“All of the naysayers don’t even look at the data that we already have, because if they did, they would see that the scenarios they are worried about—for instance, a teacher shooting a student, or a student taking a teacher’s gun, or a cop showing up and shooting a teacher—those don’t happen,” Massie said, “but what does happen is that these kids are safer, and these mass shootings don’t happen in the schools where the teachers carry and the public knows that the teachers carry.”

The 1990 law, called the Gun-Free School Zones Act, makes it “unlawful for any individual knowingly to possess a firearm at a place that the individual knows, or has reasonable cause to believe, is a school zone,” according to Massie’s website.

The Kentucky lawmaker hopes his legislation, the Safe Students Act, will gain traction as the gun control debate heats up in the wake of the Feb. 14 Parkland, Florida, high school shooting that left 17 dead.

“I was mostly appalled by the meeting yesterday, and the president’s comments, but at least he did repeat that statistic that 98 percent of mass public shootings happen in gun-free zones, and I mean, there’s no better argument for repealing the 1990 Gun-Free Zone Act than that statistic,” Massie said.

The Kentucky lawmaker said his state is leading the way on gun measures that keep students safe.

Hans von Spakovsky, a senior legal fellow at The Heritage Foundation, told The Daily Signal in an email that he recognizes why Massie thinks the Gun-Free School Zones Act should be repealed.

“I understand the sentiment and purpose behind this bill,” von Spakovsky said. “Gun-free zones stop law-abiding citizens from being able to defend themselves. They don’t stop criminals.”