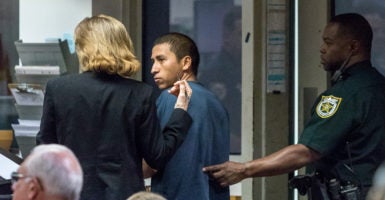 Victor Fuentes, 20, an alleged MS-13 member, appears Nov. 17 at the Palm Beach County Jail on two charges of first-degree murder. The gang has been “reinvigorated by a huge influx of ... 200,000-plus [illegal] aliens,” an official at the Center for Immigration Studies says. (Photo: Damon Higgins/Zuma Press/Newscom)

More than 500 members of the violent gang MS-13 have been arrested or charged with crimes in 22 states since 2012, a new report says.

The states with the most criminal cases related to MS-13 were California, with 92; Maryland, 85; New York, 80; and Virginia, 63, according to the report by Jessica Vaughan, director of policy studies at the Center for Immigration Studies.

Besides being a “tourist concern,” the numbers show the gang, previously weakened by police and other law enforcement officials, has been “reinvigorated by a huge influx of aliens, 200,000-plus aliens,” Andrew Arthur, a resident fellow in law and policy at the nonprofit center, told The Daily Signal in a phone interview.

Those illegal immigrants, Arthur said, include “a huge number” of minors and young adults who crossed the southern border into the U.S.

Arthur said the policies of former President Barack Obama’s administration are to blame for crimes committed by MS-13 members.

Obama’s failed immigration system “created a pool of individuals from whom MS-13 could recruit, and that is what has helped drive the reinvigoration of this gang in the United States,” Arthur said.

We conclude that this resurgence represents a very serious threat to public safety in communities where MS-13 has rebuilt itself. The resurgence is directly connected to the illegal arrival and resettlement of more than 300,000 Central American youths and families that has continued unabated for six years, and to a deprioritization of immigration enforcement in the interior of the country that occurred at the same time.

Of the 506 gang members arrested or charged in connection with crimes, the report said 207 were charged with murder and 100 others were accused of conspiracy or racketeering, and “dozens of others” were accused of sex trafficking, attempted murder, sexual assault, extortion, and drug trafficking.

The report also found that 126 of the 506 MS-13 members arrested or charged were illegal immigrants, including 38 of the 207 murder suspects.

Hans von Spakovsky, a senior legal fellow at The Heritage Foundation, told The Daily Signal in an email that the comeback of MS-13 is the fault of the Obama administration.

“This report shows that the resurgence of the brutal MS-13 gang in recent years is the direct result of the Obama administration’s encouragement of illegal immigration, especially unaccompanied minors,”  von Spakovsky said, adding:

Barack Obama bears a shameful responsibility for the hundreds of vicious murders, sexual assaults, and other crimes that would not have occurred except for his refusal to enforce our immigration laws, particularly his direction to [Immigration and Customs Enforcement] field offices to cease their efforts to disrupt gangs by arresting their members for immigration violations.