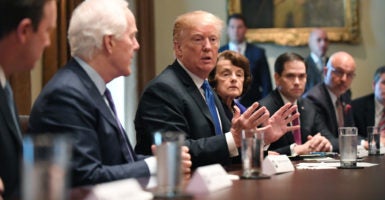 President Donald Trump meets with a bipartisan group of members from the Senate and House of Representatives Wednesday at the White House to talk about new gun laws and school safety. (Photo Pat Benic/UPI/Newscom)

President Donald Trump pushed for expanding background checks and floated the idea of raising the age to buy semi-automatic rifles, as he called for a “comprehensive” and “beautiful” bill to address guns and school safety.

Trump met Wednesday with a bipartisan group of members of Congress, two weeks after a gunman used an AR-15-style rifle to kill 17 people at Marjory Stoneman Douglas High School in Parkland, Florida, on Feb. 14.

“I’m going to lead, but we are all going to lead. We are going to get this done in a bipartisan manner,” Trump told 10 senators and seven House members gathered in the Cabinet Room. “I’m not even worried about 60 votes. I really believe that 60 votes, 60 percent, should be so easy. Should be 100 percent.”

Sen. Chris Murphy, D-Conn., a strong gun control advocate, who as a former House member represented the district where the Sandy Hook shooting occurred, responded, “I think you underestimate the power of the gun lobby.”

Trump met with leaders of the National Rifle Association on Sunday, and told members there is no reason to be afraid.

“They do have great power. I agree with that. They have great power over you people. They have less power over me,” Trump said. “What do I mean? They are well-meaning. I said to them very nicely, I said, ‘Fellas, we’ve got to do something. We have to do what’s right. When it comes to mental health and other issues, we have to do what’s right.’ And, I’m telling you, I think they’re there.”

Trump called the NRA “great patriots,” but said, “that doesn’t mean we have to agree on everything.”

Trump told the members of Congress not to worry about a bump stocks ban, because he would take care of that with an executive order.

Trump, who is still advocating allowing a limited number of teachers to carry guns, said 98 percent of all mass shootings since the 1950s occurred in gun-free zones.

He noted several times he wanted one large bill.

“I like the word comprehensive,” Trump said, adding, “It would be really nice to create something beautiful.”

One item Trump doesn’t want to consider is expanding concealed carry across state lines, as suggested by House Majority Whip Steve Scalise, R-La., the victim of a 2017 shooting in Alexandria, Virginia.

“If you look at the concealed carry population, these are people by and large who are helping us stop crimes,” Scalise said. “So I would hope that’s not immediately dismissed.”

Trump responded to Scalise, “You know I’m your biggest fan in the whole world, right?” But he added: “If you’re going to put concealed carry between states into this bill, we’re talking about a whole new ball game. I’m with you, but you’ll never get this passed if you add concealed carry, you’ll never get it passed. We want to get something done.”

Sen. Dianne Feinstein, D-Calif., pushed for a ban on “assault weapons” during the meeting, or semi-automatic rifles, such as the AR-15. She even handed a letter to the president, whom she sat next to in the meeting.

Trump didn’t endorse or reject Feinstein’s proposed ban. However, he seemed open to a federal version of what Florida Gov. Rick Scott has endorsed at the state level—to raise the age for buying a rifle from 18 to 21.

“Now, this is not a popular thing to say in terms of the NRA, but I’m saying it anyway. But think of it. You can’t buy a handgun, you have to wait until you’re 21,” Trump said. “But you can buy the kind of weapon used in the school shooting at 18. I think it’s something you have to think about. I’ll tell you what, I’m going to give it a lot of consideration, and I’m the one bringing it up. A lot of people don’t even want to bring it up because they’re afraid to bring it up.”