The Military Is Relying Too Heavily on Special Ops Forces. Mattis Must End That. 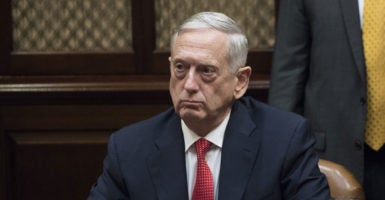 Defense Secretary James Mattis, who served in the Marine Corps for 44 years, is well-equipped to reassess which types of forces are best suited to different missions. (Photo: Kevin Dietsch/UPI/Newscom)

At a recent special operations symposium in Tampa, Florida—home of the U.S. Special Operations Command—a senior Marine commander said he was concerned that America was too often going to the special operations “well” to address its military challenges.

Unfortunately, he is correct.

Lt. Gen. William Beydler, the commander of Marine forces for all of the U.S. Central Command, America’s busiest war-fighting command, rightly noted that while the American people and leaders now have an enormous respect and fascination for units like the Navy SEALs, Army Green Berets, and Army Rangers, it might be leading the nation to neglect other capabilities.

America has multiple types of forces for a reason. Time and experience have shown that we need the “right” tool for each task.

A 12-man Special Forces A-Team (Green Berets) cannot stop an enemy tank formation alone. The best weapon for that is one of our own tank units. We can “make do” with special operations forces in extreme situations if supported by air power (think the recently released movie “12 Strong”), but that should not be the default setting. That needs correction.

The Department of Defense needs to re-evaluate its forces and get things realigned so that the best unit capabilities—not the most popular ones—address the threat being faced.

America needs to return to the concept of a full toolbox. Use the right tool in each case. Now is the perfect time to do this.

Secretary of Defense James Mattis is a proven combat leader. He has led Marines in combat and has commanded joint forces with every service and capability in the arsenal represented.

He should publicly acknowledge the problem identified by Beydler and set to work fixing it. Mattis has little time or concern for “popular” ideas. He cares even less for making constituencies happy.

Fighting the nation’s wars is not a popularity contest. You do not choose forces for a mission by what is in style today.

Mattis should lead the charge to rebalance missions and capabilities so that the absolutely best forces to prosecute any given mission are the ones sent to do the job.

You don’t send a screwdriver to do the job of a hammer. Mattis is the right guy to fix the imbalance, and he needs to move on it now.