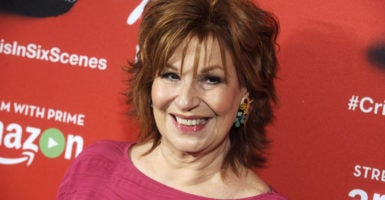 Many Christian viewers were offended by Behar’s remarks, and the TV network early on received 25,363 phone calls after the liberal comedian and commentator equated Pence’s faith with “mental illness,” Fox News reported.

“It’s one thing to talk to Jesus. It’s another thing when Jesus talks to you,” Behar said during the Feb. 13 episode of “The View.” “That’s different, that’s called mental illness.”

Pence said he regretted that ABC would allow a forum to someone who would compare Christianity with mental illness.

“When I heard that a program likened my Christianity to mental illness, I just couldn’t be silent,” Pence said in an interview with Fox News. “It is simply wrong for ABC to have a television program that expresses that kind of religious intolerance.”

I do try and start every day reading the Bible. My wife and I try to have a prayer together before I leave the house every morning. But I do think I’m a very typical American. I think people of all different faith traditions cherish their faith in God. https://t.co/evs2Wvr6fB

It is a basic tenet of Christianity that God—in three persons, the Father, the Son, and the Holy Spirit—speaks to believers not only through the Bible but in their prayer lives and in ordinary circumstances.

Behar’s comment on “The View” aired the day before the Florida high school shooting, just after a clip from CBS’ “Celebrity Big Brother” featuring former White House staffer Omarosa Manigault Newman and her thoughts on Pence.

In the clip, Newman said that those hoping for President Donald Trump’s impeachment should reconsider because of Pence.

“I am Christian, I love Jesus, but he thinks Jesus tells him to say things,” Newman said, referring to Pence.

Behar then equated Pence’s Christianity with mental illness, implying that the vice president hears voices in his head.

Joe Concha, media columnist for the Hill, said “The View” should come under ABC Entertainment, not ABC News, if the network is going to allow remarks such as Behar’s.

“It’s a pure opinion and infotainment program, and therefore should be under its entertainment division,” Concha told Fox News.

Despite calls for her to apologize, Behar declined and said only that she was making a joke.

ABC did not respond to The Daily Signal’s request for comment.