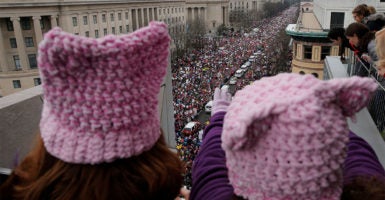 Millions of women march across cities nationwide, but seldom do they speak up about women across the globe who are suffering at the hands of oppressive regimes. (Photo: Brian Snyder/Reuters/Newscom)

As Americans, it’s rare we engage in a national conversation while putting our political beliefs aside. Mass murders like the Columbine school shooting and 9/11 once united us. But in the era of Donald Trump, they’ve deepened our divisions.

That’s why the conversation surrounding the #MeToo movement is so unique. Democrats, Republicans, liberals, and conservatives have—for the most part—put their political beliefs aside to speak out against sexual violence.

But just because people from diverse perspectives are engaged in the movement doesn’t mean #MeToo is devoid of political inspirations or end goals. Already, Democrats have used it to pressure President Donald Trump to resign.

Whether motivated by moral judgment or a distaste for his presidency, these calls are dangerous and threaten to hurt an already fragile conversation. Yes, the president has faced some serious allegations, and those deserve to be addressed.

But in 2016, Americans were well aware of his behavior and chose to vote for him anyway. Using #MeToo as a political weapon against the president runs the risk of driving Republicans away.

#MeToo has more problems than one. Lazy journalism has conflated sexual harassment with sexual assault. Accused men don’t always get due process.

And in every direction, the media would have you believe the movement is all thanks to liberal Hollywood and the far-left Women’s March, despite conservative women such as Gretchen Carlson who have paved the way.

Even with its flaws, I would argue #MeToo has done far more good than harm. Others may disagree, but when 51 percent of American women report experiencing unwelcome sexual touching and 30 percent report being flashed or shown male genitalia against their will, it’s clear that a conversation surrounding sexual assault and harassment was overdue.

Conservative women know this, but some, including myself, are still skeptical. Instead of reacting to our skepticism with resentment, consider taking a moment to understand why conservative women respond with caution to a movement that’s become so closely associated with modern feminism as defined by the left.

Lessons From the Women’s March

In November 2016, after Trump was elected president, a grandmother in Hawaii had the novel idea to launch a “Million Women March,” which later became known as the Women’s March. Although inspired by rhetoric on the 2016 campaign trail, the organizers promised the march wasn’t about protesting Trump—it was about how “women’s rights are human rights,” a message we could all support.

This message was broad enough to attract some Never Trumpers, pro-life feminists, and rape survivors who support the Second Amendment.

But quickly, we learned, these views were far too problematic.

A few months after casting a wide and blind net for support, with women protesting to achieve reforms they didn’t yet know about, the Women’s March organizers released their policy positions, revealing how radical their feminist agenda really is:

Government-funded abortion without any restrictions.

Rights for illegal immigrants and refugees regardless of status or country of origin.

It’s safe to say more than a few of us felt left out or, worse, misrepresented by a movement that claimed to represent us.

But it wasn’t just the liberal platform that left a bad taste in the mouths of many conservative women, or the march organizers’ decision to exclude a diversity of thought. It was also their inaction when it came to addressing actual human rights violations around the world that led conservative women to say, “Enough.”

One early example of this dates back to its decision to hijack attention from International Women’s Day and turn it into yet another anti-Trump protest.

“A Day Without a Woman” was a massive failure, and overlooked what International Women’s Day should have been all about.

Then, the Women’s March said nothing when Saudi women were granted the right to drive. Why? Likely because one of its leaders, Palestinian-American political activist Linda Sarsour, a Muslim, is a defender of Sharia law.

Most recently, the Women’s March ignored protests in Iran, where women have taken their hijabs off in public at the risk of facing arrest. Instead of voicing support for a movement protesting real inequalities, the Women’s March tweeted about Macy’s deciding to sell hijabs in its department stores.

The Women’s March is a self-serving entity that excludes not just women who disagree with the organizers politically, but women who are really in need of our help.

And yet, most of the media has enabled the Women’s March to define feminism in the era of Trump, leaving conservative women in an awkward spot.

Does #MeToo include #UsToo? That was the question that Marji Ross of Regnery Publishing posed Saturday to Ashley McGuire of the Catholic Association, Mona Charen of the Ethics and Public Policy Center, and myself during the Conservative Political Action Conference in National Harbor, Maryland.

#UsToo: Left Out by the Left

If you ask conservative women whether they identify as feminists, you’ll likely received mixed responses. Some, such as White House senior adviser Kellyanne Conway, resist the term because it’s too closely associated with “anti-male” and “pro-abortion.”

“It’s difficult for me to call myself a feminist in a classic sense because it seems to be very anti-male, and it certainly is very pro-abortion, and I’m neither anti-male or pro-abortion,” Conway said last year at CPAC. “I look at myself as a product of my choices, not a victim of my circumstances.”

(If you don’t believe Conway about the left’s viewing abortion as a litmus test for feminism, then take it from abortion activist Erin Matson. “There is no such thing as a feminism that tolerates opposition to abortion,” Matson announced to applause at the Detroit Women’s March convention. “It is simply impossible to be a feminist and oppose a woman’s right to her own body.”)

First-wave feminists such as Susan B. Anthony made important strides for women that we should never take for granted. Full-throatedly rejecting the term “feminism” does a disservice to their work.

But how do we square our debt to them when second- and third-wave feminists have gone so far in watering down the term to mean you’re oppressed because you were mocked for wearing a dress in the cold? That, in my opinion, is equally a disservice to their work.

True feminism requires diversity of thought. It requires an agreement to disagree while still supporting women, and an ability to look beyond ourselves and survey how all women are faring in our world. When we see injustices in the United States, we must call them out. But feminists should never equate injustices with inequalities.

That is insulting to the 200 million girls and women in the Middle East and Africa who are subjected to female genital mutilation, in which part or all of their genitalia is removed.

That is insulting to the 39,000 little girls who are forced into an arranged marriage every day.

That is insulting to the millions of women in the Middle East who still don’t have equality before the law, and are stifled by oppressive regimes.

First-wave feminism is still needed in many countries. It’s easy to forget how privileged we are in the U.S. to be in a place where we can have the #MeToo conversation. In other parts of the world, sexual assault and physical abuse is still a fact of life for far too many women.

Feminists such as those who subscribe to the Women’s March would be wise to open their eyes to these realities and join hands with conservative women to say not just #MeToo, but #UsToo.

Instead of narrowing the definition of feminism to include only the most radical of views, let’s broaden it. With all those women, I can only imagine what we could do.