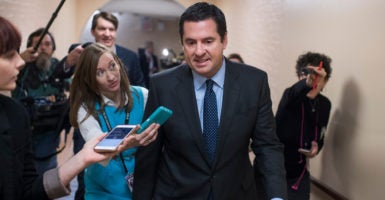 “We think it is clear evidence that Democrats are not only trying to cover this up, but they are also colluding with parts of the government to help cover this up,” Rep. Devin Nunes, R-Calif., said at CPAC. (Photo: Tom Williams/CQ Roll Call/Newscom)

The chairman of the House intelligence committee is accusing his Democrat colleagues of trying to cover up wrongdoing in the government’s surveillance of a former campaign aide to then-candidate Donald Trump.

Speaking to The Daily Signal moments after a Democrat memo was released Saturday, Rep. Devin Nunes, R-Calif., said the long-awaited document is so shocking because of what it reveals about the Obama administration, Hillary Clinton’s presidential campaign, and Democrat operatives.

“We really wanted it out because it’s clear evidence that the Democrats are trying to actually not only collude, but they’re colluding with a cover-up. And they’re trying to cover up the fact that the Democrats and the Hillary campaign paid for dirt and it was used by the FBI,” Nunes told The Daily Signal after speaking at the Conservative Political Action Conference.

“It’s amazing they’re actually willing to write a memo that actually says that—as if it’s OK for that to happen. Because it’s simply not OK,” he added.

Earlier this month, under Nunes’ direction, Republicans on the House Permanent Select Committee on Intelligence released their own memo, which alleged abuses of government surveillance on the part of the FBI.

“The Foreign Intelligence Surveillance Act is how we go and track terrorists down, which I’m in favor of and I want to do. It’s critically important. But when they opened counterintelligence investigation into a presidential campaign—so you’re talking about the highest levels of our government—it should scare the hell out of a lot of people.”

In his remarks to CPAC attendees, Nunes addressed why it took so long for Democrats to release their memo.

“The FBI and [Department of Justice] right away had told the Democrats what was wrong with their response to our memo. And they waited for two weeks before they actually did the redactions that were necessary to get this out,” Nunes said at CPAC.

“We think it is clear evidence that the Democrats are not only trying to cover this up, but they are also colluding with parts of the government to help cover this up,” he added.

On Feb. 2, the House intelligence committee released a memo that showed opposition research was conducted against Trump, funded by Clinton’s presidential campaign and the Democratic National Committee, and was part of the Obama administration’s application to conduct surveillance on Trump campaign aide Carter Page, as The Daily Signal previously reported.

The investigation of Trump’s supposed collusion with Russia and possible coordination during the election campaign is now the subject of a widening probe by special counsel Robert Mueller.

Nunes told CPAC attendees the Democrat memo, despite its hype, doesn’t rebut the earlier claims made by Republicans.

“I think as you read it, you will see personal attacks on myself, personal attacks on Chairman [Trey] Gowdy, with a lot of really interesting things that sound really bad—like a lot that has been happening in this Russia investigation over the course of the last year,” Nunes said. “But what you are not going to see is anything that actually rejects what was in our memo.”

“The point of our memo was for one purpose only,” Nunes added, “and that was to show that FISA abuse had occurred. To have a secret court that gets abused like this is totally unacceptable.”

CPAC, the largest annual national gathering of conservative activists, ran from Thursday to Saturday at the Gaylord National Resort and Convention Center in National Harbor, Maryland, just outside Washington.

This story was updated to include quotes from The Daily Signal’s interview with Nunes.