Campus Activists Take on a Generational Battle for Free Speech 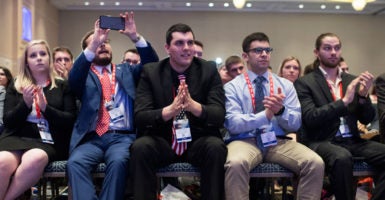 The battle for Western civilization is taking place on the campuses of American universities and high schools, activists argued Thursday at the Conservative Political Action Conference.

Five conservatives spoke out against liberal bias on college campuses on a panel that, in a reference to North Korea’s communist dictator, was titled “Kim Jung Un-iveristy.”

“Somehow liberals are the party of freedom, but they don’t actually promote freedom at all,” Turning Point USA founder Charlie Kirk said. “[The left] believes in one-size-fits-all solutions.”

Kirk argued that liberal college students want to promote “freedom of race,” but not freedom of thought.

Panelists talked about how college campuses claim to promote free speech, yet students across the country are subjected to “free speech zones”—small, designated areas on campus where students may exercise their First Amendment rights.

As a college student, Fotenos attributed the success of his campaign to a platform that proposed to rid his school’s campus of free speech zones.

“The First Amendment of the United States Constitution should cover every square inch of the University of Colorado-Boulder campus,” Fotenos said.

The suppression of free speech extends to speakers who would like to speak on campus, the activists said.

One example Rowe cited was DePaul University’s refusal to allow commentator Ben Shapiro and other conservative speakers on campus. DePaul threatened to arrest Shapiro if he stepped foot on campus, Rowe said.

DePaul, a private university, is not subject to the same free speech guarantees as public universities.

Strobl told CPAC attendees that the Young America’s Foundation is suing University of California, Berkeley over suppression of free speech.

Pavlich and Thornton brought up survey findings that a majority of college students say they believe socialism is a better political system than capitalism.