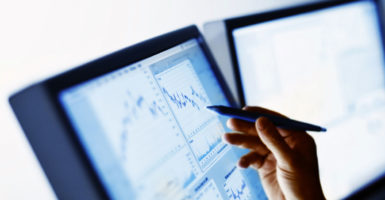 In the wake of tax reform, some on the political left have placed attention on the rise in corporate stock buybacks. (Photo: Stevecoleimages/Getty Images)

Skomantas Pocius is a member of the Young Leaders Program at The Heritage Foundation.

Americans are now experiencing the benefits of tax reform. Employers are sending less of our paychecks to Washington, millions have received unexpected bonuses, and businesses of all sizes have increased investment in the U.S. economy.

Despite the good economic news and significant tax cuts for more than 80 percent of Americans, some wish to focus exclusively on a number of corporate stock buybacks that have been announced since tax reform was signed into law.

If you are looking for corporate greed, it is easy to see why stock buybacks and increased dividend payments are such a good boogeyman.

When businesses don’t have suitable investment options for all their profits, they give part of them back to their investors so that those individuals can instead reinvest in other endeavors.

That’s the purpose of a buyback or dividend payment. Some businesses are essentially giving their tax cut back to their shareholders. It is easy to stop the analysis there and conclude that executives and rich owners of companies are making out like bandits.

These claims fit a convenient political narrative; namely, that only the rich will benefit from business tax cuts. An honest accounting requires a deeper look.

Whenever a company buys back some of its shares, owners of those shares gain money. In the U.S., shareholders are ordinary people, with more than half of all families owning stock, directly or indirectly. We are talking about your retirement savings or your kids’ college fund.

The rate of stock ownership is increasing, with some of the biggest gains coming from lower-income households. The notion that only the wealthy benefit when businesses return profits to their investors is based on a mistaken view of stock ownership that may have been true in the 19th century, but certainly isn’t so today.

What’s more, the profit that investors gain can then be reinvested in another enterprise or spent on goods and services. Both of these activities benefit the economy, whether by increasing business investments and job opportunities, or by increasing consumer demand.

Seldom does an investor take a return and stuff it under the proverbial mattress.

There is also something even bigger at work.

Central to the corporate-buyback complaint is that businesses are spending their money on stock buybacks, rather than increased wages. But businesses don’t just raise wages owing to a sense of corporate benevolence. Rather, wages rise when the economy grows and the demand for workers increases.

This forces businesses to increase wages out of self-interest, to keep their employees from being hired away by competitors.

That’s exactly what’s happening. Higher returns on investment because of tax cuts mean that investors are building new and expanded businesses here in the U.S.

Demand for workers is driving wages up. Unemployment is at a 17-year low, and wages are rising faster than they have since 2009. Indeed, more than 300 companies announced raises and bonuses for their employees in the first month of the reform.

All in all, stock buybacks are common and a signal of a healthy economy. Over a similar period last year, buybacks totaled close to $140 billion.

They may be an easy target to vilify, but we should base our attitude toward them on sound economic thinking, rather than political agitation.