The Hypocrisy of Pro-Choice Groups Who Preach Compassion and Inclusion 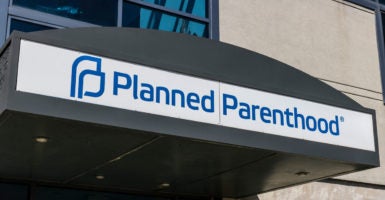 Planned Parenthood has systematically worked to remove protections for unborn babies with Down syndrome and chromosomal defects. (Photo: Jetcityimage/Getty Images)

The cruelty of the movement to promote abortion on demand has been on full display the past two weeks.

In three notable instances, advocates for a regime of legal abortion until birth have shown the hollowness of their claims to speak for women and the rights of the young, the defenseless, and the disabled.

First, there was the astonishing vote in the Senate to reject a proposal to limit abortion after five months of pregnancy.

The United States is one of only seven nations on earth that permit elective abortion after 20 weeks—five full months—of pregnancy. In this twilight zone, we stand beside such stalwart respecters of individual human rights as the People’s Republic of China and North Korea.

Liberal pretensions about caring for “the little guy” were washed away as senators such as Chuck Schumer, D-N.Y., and Heidi Heitkamp, D-N.D., “high-fived” their jubilation on the Senate floor as protections for these children, who can feel the pain of late-term abortion and can frequently survive outside the womb, were dashed for another year.

Second, there was the unsurprising action by Planned Parenthood, which went to court last week to block a new Ohio law that asserts a child in the womb diagnosed with Down syndrome cannot be killed.

Planned Parenthood is the largest abortion provider in the United States, and possibly the world. It is the leading litigator against any and all laws to protect life and safeguard women’s health in abortion facilities.

It claims to stand for all manner of human diversity, but when it comes to babies with the extra chromosome that characterizes Down syndrome, Planned Parenthood is for the death penalty.

In this regard, it is flying in the face of a society that increasingly sees disability as the kind of blessing that brings out the best in everyone else.

Just two weeks ago, the Gerber baby food company, iconic for Americans because of its decades of cereal boxes displaying a beautiful infant, announced that little Lucas Warren, age 1, from Dalton, Georgia, had won its annual contest to be the Gerber baby for 2018.

Lucas is a stunningly beautiful baby, but even more obvious from his glowing visage is how happy a child he is. That is a rule of thumb for children with Down syndrome. They are unusually happy children, and research says, so are their families.

To Planned Parenthood, their condition is one more reason—and it needs no reason—to allow them to be killed. This is the attitude that has nearly visited extinction on children with Down syndrome in Iceland and elsewhere in Europe.

Rich economically, but poor in terms of shrinking demographics, much of Europe has no room for these little ones. And Planned Parenthood is on deck washing them overboard with vigor.

After these actions, the third sign of the abortion advocates’ moral bankruptcy and contradiction follows naturally. For months, the ACLU and others have been suing the federal Office of Refugee Resettlement in an attempt to create a new foreign policy of abortion facilitation for refugees—in this case, minor girls—who reach our shores.

After years of pontificating about how they welcome the stranger, believe in “dreamers,” and reject xenophobia, the leftist phalanxes have found someone from overseas whose presence they cannot abide—namely, the child in the womb of its young mother.

Now it appears they have gone further, and for the sake of their ideology, persuaded a teenage emigre to sign legal papers to obtain an abortion she does not, in fact, want.

There is a perfect irony in this, because the regime of Roe v. Wade—on which the radical left has staked its absolute claims regarding abortion—rested on legal actions by two women who were likewise induced to sign papers, never had abortions, and later championed the right to life.

We must keep in mind that it is the United States that is the outlier here.

Babies in the womb are protected by the law in most countries of our hemisphere. Only Canada in our hemisphere has so extreme a law as ours.

The American Convention on Human Rights, to which the United States is a signatory, affirms the adherence of these countries to the conviction, as Article 4 states: “Every person has the right to have his life respected. This right shall be protected by law and, in general, from the moment of conception.”

Alone, in a new land, and facing pressures few of us will ever know, minor girls from other nations are especially vulnerable to the abortion industry’s siren songs of fear.

To their great credit, Trump administration officials at the rightly named Administration for Children and Families are standing up for these girls and for our nation’s core values.

They are, in fact, welcoming the stranger and offering support to help young women make decisions that will affect their mental and even physical well-being for a lifetime.

They are opposing cruelty and the deception of those who say they welcome everyone, when in truth they seek to slam the golden door in the faces of these mothers and babies.