Fact Check: Have Over 1,600 ‘Mass Shootings’ Occurred Since Sandy Hook? 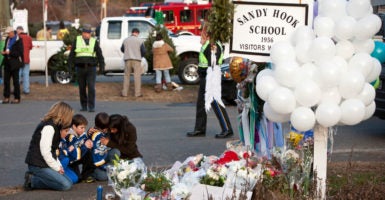 Visitors weep near a memorial set up for the 20 children and six educators killed three days earlier, on Dec. 12, 2012, in the Sandy Hook Elementary School shooting. (Photo: Natan Dvir/Polaris /Newscom)

The New York Times editorial board said more than 1,600 mass shootings have occurred in the U.S. since the massacre at Sandy Hook Elementary School more than five years ago, in December 2012.

No universally accepted definition exists for “mass shooting,” but the one used by the Times is extremely broad. Another liberal news outlet, Mother Jones, identified only 35 mass shootings since Sandy Hook, using a narrower set of criteria.

The Times stated the number of mass shootings in an editorial chronicling congressional action (or inaction) on gun control legislation since the Sandy Hook massacre in Newtown, Connecticut.

“More than five years have passed since the shooting at Sandy Hook Elementary School, where 20 children and six adults were killed,” the editorial said. “In that time, dozens of gun control proposals have been introduced in Congress attempting to fix glaring issues with gun safety and regulation. More than 1,600 mass shootings have taken place in America since then.”

A footnote at the end of the editorial defines a mass shooting as “four or more people injured or killed in a single event at the same time and location.” This is the same definition used by the Gun Violence Archive, a gun control advocacy group.

The definition of a mass shooting is debatable, but even some gun control advocates use a narrower definition. Everytown for Gun Safety counted  156 mass shootings from 2009 through 2016 in a 2017 report.

Most analyses of mass shootings only count instances where at least four people were killed (rather than killed or injured), because that’s how the FBI has defined the term “mass murder.”

A 2015 Congressional Research Service report counted at least 317 mass shootings from 1999 to 2013 using the “four deaths” definition, although a 2013 law defined a “mass killing” as three or more deaths.

Including injuries in the definition dramatically increases the number of so-called mass shootings. The Gun Violence Archive’s public data from September 2016 to February 2018 shows that no one died in 223 of the 500 incidents it counts as mass shootings.

Some argue that qualifying a mass shooting solely on the number of victims makes the data “overly broad.” Scholars at the Harvard School of Public Health and Northeastern University told Mother Jones in 2014 that various types of mass murders are “contextually distinct.”

In layman’s terms, “mass shooting” may evoke the idea of a random public attack akin to the shootings in Newtown, Las Vegas, or Parkland, Florida.

The definition from the Times and the Gun Violence Archive, however, includes instances of domestic violence, drive-by shootings, disagreements at bars and parties, gang violence, and robberies.

The narrower analysis from Everytown, which counts only shootings with four or more deaths, found that 54 percent of the cases from 2009 to 2016 were related to domestic or family violence.

To better analyze the type of mass shootings in public that get a lot of media coverage, a tracker by Mother Jones counts only incidents that took place in public and were carried out by a lone shooter; it excludes situations such as armed robbery or gang violence. Under that definition, there have been 35 mass shootings since Sandy Hook.

John Lott, a gun rights advocate and president of the Crime Research Prevention Center, told The Daily Caller News Foundation that the large number used by the Times can “confuse people” who wouldn’t expect such a wide variety of crimes to be included.

That is particularly so, Lott said, since the newspaper presented the figure in the context of massacres that get media attention. He said the figure isn’t very useful for making policy decisions.

“The thing is, causes and solutions on what to do about gang fights are dramatically different than what you do about these mass public shootings,” Lott said.

But proponents of a broader definition say some blatant public mass shootings would not count under definitions using a four-deaths threshold. In the Jan. 23 school shooting in Benton, Kentucky, for example, two people were killed and 18 more wounded or injured.

Jim Bueermann, a former police chief and president of the Police Foundation, a think tank on policing practices, told The Washington Post that it is valuable to include injuries or wounds when counting mass shootings because a small difference sometimes separates grave wounds and death.

“I would submit that sometimes the only difference between a shooting and a murder could be a centimeter, an inch, an unlikely ricochet, whatever,” Bueermann said. “If we’re trying to capture true gun violence in our country, a broader definition [of mass shooting] is probably more useful than a narrow one.”

The Gun Violence Archive, Everytown for Gun Safety, and The New York Times did not respond to requests for comment in time for publication of this analysis.

Content created by The Daily Caller News Foundation is available without charge to any eligible news publisher that can provide a large audience. For licensing opportunities for this original content, please licensing@dailycallernewsfoundation.org.