Veterans Affairs Chief Alleges Hack of Email, but Agency Says No Evidence of It 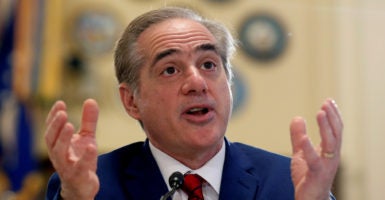 Secretary of Veterans Affairs David Shulkin, who says someone impersonated his chief of staff in one or more emails, testifies Feb. 15 to a House committee on the agency's budget. (Photo: Joshua Roberts/Reuters/ Newscom)

In an interview, Department of Veterans Affairs Secretary David Shulkin detailed new claims that his agency was hacked or spoofed, but the VA released a statement within the hour saying it could find no evidence of compromised emails.

“It was a request to wire money out of the VA to somewhere else,” Shulkin said of one email in the interview Friday with The Daily Caller News Foundation.

Rep. Mike Coffman, R-Colo., said the discrepancy between Shulkin and his own agency appeared to be evidence of an attempt to “muddy the waters” around an investigation that led to the resignation of Shulkin’s chief of staff.

That report hinged upon findings that the VA secretary’s longtime chief of staff, Vivieca Wright Simpson, changed a June 2017 email to facilitate the payments for the trip.

On Thursday, Shulkin implied to a House committee that Simpson might not have been responsible for that email, and rather, it might have been a hacker impersonating her. He insisted that his department has “found there are people sending emails from her account that aren’t her.”

In a videotaped interview Friday at the offices of The Daily Caller News Foundation, Shulkin said his assertions of hacking rested upon an impersonation attempt that occurred hours before he told the House Veterans’ Affairs Committee about a history of such activity.

On the day the inspector general’s report came out, an email sent from his chief of staff’s account requested a suspicious wire transfer of funds from the VA, he said.

“It was a request to wire money out of the VA to somewhere else,” Shulkin said. “Fortunately our finance department thought that was an unusual request and brought it to our attention, so there was no money sent out.”

The finance department came to Mrs. Wright Simpson on Wednesday morning and said, ‘Why are you requesting a wire transfer outside the VA?’ and they brought her the email, and she said, ‘I never wrote that email.’ Mrs. Simpson’s email was being impersonated by someone else.

Shulkin said the financial request was “hacking” or “spoofing,” and did not actually come from Simpson.

“Wednesday was the first time that I was aware of that single situation, and certainly want to make sure that we understand whether it was an isolated situation or something more extensive. … I don’t know whether this is related to the approval of the travel, that’s something we want to understand, but we don’t have any evidence of that right now.”

“The motivation was a financial crime,” Shulkin said.

It was not clear what motive an impersonator would have for altering an email to help Shulkin’s wife, Merle Bari, book a trip, and the VA secretary acknowledged that “we have no evidence that that’s related to the IG report, none at all.”

An hour after he left The Daily Caller News Foundation’s newsroom Friday afternoon, the VA’s website posted a statement saying it had found no evidence of any hack, either in June or Wednesday.

“We have thus far found no credible or conclusive evidence of a compromise to our email system or a user’s account,” it said.

Some observers questioned Shulkin’s claims that someone was impersonating his chief of staff and said they were suspicious that his allegations coincided with the release of the inspector general’s report.

“Based on the timing and the VA’s own press release, which found no evidence of an outside intrusion, this appears like it could be a setup, a faked hack,” said Coffman, a member of the House Veterans’ Affairs Committee. “I think that’s very suspicious. This is kind of ‘My dog ate my homework.'”

Congress should call for Shulkin’s resignation, Coffman said, because of what he calls earlier manipulation of evidence and now the implication to lawmakers that there was credible reason to think the email might not be real.

“What we know now is there’s no evidence of a hack,” Coffman said. “I think he’s trying to muddy the waters on this. It’s not the issue itself, it’s the cover-up; it speaks to his lack of integrity.”

An early indication that the “hack” wasn’t what it seemed came at the hearing Thursday, when a committee member said the Justice Department  should be brought in to prosecute the hacker, Coffman said.

“I looked at the secretary’s face, and he seemed surprised, like ‘Uh-oh.’ But what else would you do?”

Pete Hegseth, a former head of Concerned Veterans for America who has studied the Department of Veterans Affairs, said that “to any level-headed person, this appears to be manufactured.”

“The IG needs to look into whether he made this up,” Hegseth said.

Shulkin has gone to significant lengths to try to control the fallout of the inspector general’s report. Before the purported impersonation attempt, the VA secretary hired an outside company specializing in public relations crisis management to come up with strategies to rebut the findings.

Shulkin found himself on thin ice with the White House after warning officials there that a report was coming, but downplaying its severity. The action caused some Trump administration officials to feel misled, The Washington Post reported. The White House forced Shulkin to delete a statement that said, “I have done nothing wrong.”

But on Friday, he declined to provide examples when asked if he’d done anything wrong.

In initial comments Thursday to Congress and to reporters, Shulkin implied that an impersonator may have written the email on travel to Europe.

However, the questioned email came following a verbal conversation, in the middle of a rapid-fire, back-and-forth email thread, and included a request by Simpson to move the conversation over to phone by calling her at her office.

Simpson herself would not deny having altered the email, but instead played coy, the inspector general’s report said.

Shulkin didn’t explain how someone could have sent out emails in Simpson’s name without his chief of staff’s knowledge given that recipients replied to those emails.

Shulkin said he did recognize that someone sending an email using his chief of staff’s name would be a serious offense.

“Impersonating a government official’s email is a serious crime,” he said.

Simpson stepped down from her post hours before Shulkin’s interview.

“Simpson has elected to retire following the release of a VA Inspector General investigation,” the agency said in a press release. “VA also announced that it has opened a formal investigation into her actions.”

Shulkin acknowledged that the scandal has become not about the European junket, but about his trustworthiness and integrity.

The inspector general’s report determined that Shulkin personally said he could accept free tickets to Wimbledon on the trip because they were given by a friend of his wife’s, but that person could not recall his wife’s name.

Investigators also found that the VA “issued a misleading statement to The Washington Post about the trip and did not correct the statement.”

John Ullyot, assistant secretary for public and intergovernmental affairs, said Shulkin personally drafted the offending passage, but the VA secretary said he had no involvement.

Before the Friday interview, The Daily Caller News Foundation learned from a senior department official that Shulkin has an upcoming official trip to the Vatican with his wife.

In the interview, Shulkin was asked what benefit the trip would provide to taxpayers or veterans.

“I am not going on any trip to the Vatican or any trip abroad. That is not happening,” Shulkin responded.

The source reiterated that the trip is currently on the books, saying Shulkin and his wife are scheduled to travel to Vatican City from April 20 to 29 to attend the Pontifical Council for Culture.

The Vatican is the one of few countries that do not have a military. The Council for Culture includes a show of European art and religious history.

Content created by The Daily Caller News Foundation is available without charge to any eligible news publisher that can provide a large audience. For licensing opportunities for this original content, email licensing@dailycaller

Julia Nista is an associate editor and reporter for The Daily Caller News Foundation.