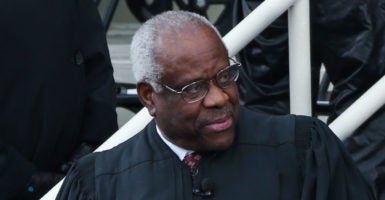 “At some point we’re going to be fatigued with everybody being a victim,” Justice Clarence Thomas says. (Photo: Anthony Behar/Sipa USA/Newscom)

Supreme Court Justice Clarence Thomas decried the contemporary culture of victimhood during public remarks, telling an audience at the Library of Congress that constant aggrievement would exhaust the country.

Ever a touchstone for controversy on racial issues, Thomas related a story from a recent trip to Kansas, where a black college student told him she was primarily interested in school work, and less interested in the political tumult gripping college campuses.

“At some point we’re going to be fatigued with everybody being a victim,” the justice said Thursday at the library event.

Thomas has struck similar cords throughout his public life. He appeared on Laura Ingraham’s Fox News program in November 2017, and suggested contemporary activists could learn from the example of his grandparents, who exhibited quiet fortitude during the heady days of white supremacy.

He made his remark last week in the context of a broader discussion about his childhood. Thomas was born in Georgia’s coastal lowlands among impoverished Gullah speakers, and spent his childhood working his grandfather’s farm. He likened his upbringing to Kathryn Stockett’s 2009 novel “The Help” as most of the women in his life, including his mother, were domestics in white households.

Given the few options open to blacks in the Jim Crow South, Thomas’ family felt they had no choice but to do the best with what they had. The justice detects the hand of providence in those select opportunities open to him, like parochial education and Savannah’s Carnegie Library, which served the black population.

As detailed in his 2008 memoir, Thomas inherited these sensibilities from his grandfather. The future Supreme Court justice was sent to live with his grandparents after a fire ravaged his mother’s home during his childhood.

By Thomas’ telling, his grandfather was the defining figure of his life. When he joined the Supreme Court in 1991, his wife commissioned a bust featuring his grandfather’s favorite quote.

“His favorite quote was, ‘Old Man Can’t is dead. I helped bury him,’” Thomas said.