Trump Should Withdraw Radical Nominee Who Would Oppose Religious Liberty 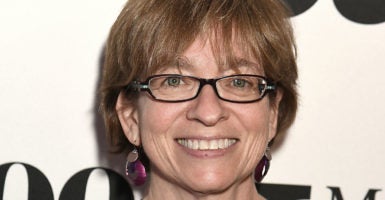 Chai Feldblum, who has served as an EEOC commissioner since 2015, has said she is "not sure marriage is a normatively good institution." (Photo: Robin Platzer/Twin Images/LFI/Photoshot /Newscom)

The Equal Employment Opportunity Commission may seem like an unlikely threat to religious liberty and the institution of marriage. After all, the federal agency was created to combat workplace discrimination by the Civil Rights Act of 1964.

But sadly, the agency created to fight discrimination now threatens to discriminate itself. One nominee to the commission’s five-member board wants to use the federal agency’s power to undermine our nation’s founding principles.

Chai Feldblum was first nominated to the commission by President Barack Obama in 2009, but she was not confirmed by the Senate. In March 2010, Obama skirted the Senate by seating Feldblum on the commission when Congress was in recess.

The Senate ultimately confirmed Feldblum on a 54-41 vote during a lame-duck session in December of that year. Only two Republicans voted for Feldblum’s confirmation.

If Feldblum were a typical Democrat, it might make sense to let her nomination proceed through the Senate along with her two Republican colleagues. But Feldblum is no typical Democrat. Her radical views on marriage and the appropriate use of government power place her far outside even the liberal mainstream.

Feldblum has argued that, “I, for one, am not sure marriage is a normatively good institution.” Instead of promoting marriage as the best arrangement for the emotional and economic security of families, Feldblum believes “all of us are harmed … when society fails to acknowledge the wide array of non-marital social structures.”

Feldblum even signed a manifesto proposing government recognition of “diverse kinds” of partnerships that “move beyond the narrow confines of marriage politics” in the United States.

Don’t think for a second that Feldblum’s derogatory views about marriage will stay private. Feldblum wants to turn her opinions into federal policy through the commission.

“The [Equal Employment Opportunity Commission] has jurisdiction only over employment,” Feldblum told the Washington Blade in 2015. “But other federal agencies that enforce sex discrimination provisions often look to our interpretation for guidance in interpreting the laws they enforce.”

And don’t think for a second that you, your family, and your neighbors will be left alone if Feldblum gets her way. Feldblum has described modern-day politics as a “zero-sum game,” where rights for LGBT Americans are secured only by curtailing the rights of religious Americans.

Likewise, Feldblum believes her radical agenda “cannot be adequately advanced if pockets of resistance … are permitted to flourish.” She therefore has argued that “no individual exceptions based on religious beliefs” should ever be allowed if they conflict with “the goal of liberty for gay people.”

Feldblum’s desire to use the might of government to stamp out traditional marriage supporters stands in stark contrast to Justice Anthony Kennedy’s majority opinion in Obergefell v. Hodges, which redefined marriage in 2015.

“The First Amendment ensures that religious organizations and persons are given proper protection as they seek to teach the principles that are so fulfilling and so central to their lives and faiths,” Kennedy wrote. “And to their own deep aspirations to continue the family structure they have long revered.”

As the Supreme Court acknowledges, America’s tradition of religious freedom embraces all. Rather than a “zero-sum game” that pits Americans against each other, we should work to build an America where “all possess alike liberty of conscience and immunities of citizenship,” as George Washington wrote in 1790.

The president and Senate Democrats should reject Feldblum’s divisive agenda by finding a more mainstream candidate for the Equal Employment Opportunity Commission, one who respects the institution of marriage and religious freedom for all Americans.