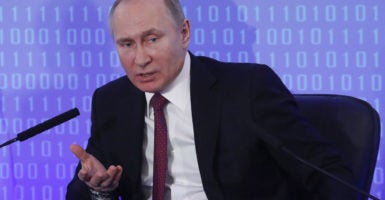 Russian President Vladimir Putin speaks during a Feb. 9 session of the Week of Russian Business, organized by the Russian Union of Industrialists and Entrepreneurs in Moscow. (Photo: Sergei Karpukhin/Reuters/Newscom)

Congress appears ready to crack down on individuals and groups who work on behalf of Russia and other foreign nations but don’t fully disclose those ties.

Legislation toughening requirements and closing loopholes in the 80-year-old Foreign Agents Registration Act is advancing in response to growing concerns that some advocacy groups and lobbyists have been permitted to conceal financial and other connections with foreign governments.

In a recent phone interview with The Daily Signal, Rep. Mike Johnson, R-La., who introduced the legislation amending the law, expressed confidence that his bill could clear both houses of Congress with broad support.

“We are grateful this became a bipartisan bill and that the leadership of the judiciary committees in the House and Senate saw real value in it, and this has created a groundswell of support,” Johnson said, adding:

I suspect we are going to move the bill because transparency is good for everyone, and this is about disclosing to the American people who is trying to influence our politics. We have lots of foreign influences attempting to lobby the federal government all the time, and transparency is not a big thing for us to ask.

#UraniumOne paid $$$ to #PodestaGroup as they lobbied U.S. government officials. Podesta group was not registered under FARA at the time, hiding foreign interests from the American people.

Read my op-ed in the @DailyCaller here –> https://t.co/dcarnr3s2h

The Foreign Agents Registration Act, which predates World War II, requires anyone who acts as an agent of foreign principals “in a political or quasi-political capacity” to disclose that relationship periodically, as well as “activities, receipts, and disbursements in support of those activities,” according to the Justice Department.

For too long, certain organizations with ties to foreign interests have been permitted to “operate in the shadows,” Johnson, a member of the House Judiciary Committee, said.

“Washington lobbyists have been working overtime to kill the bill,” he said of the measure he introduced in October.

The law isn’t achieving all that it should, Bonner Cohen, a senior fellow at  the National Center for Public Policy Research, a free-market think tank based in Washington, told The Daily Signal.

“The Foreign Agents Registration Act calls on individuals and organizations to provide full disclosure when they are working to advance the public policy interests of a foreign government,” Cohen said.

“This appears to be exactly what these green groups are doing,” he added, “and the law should be applied to them.”

In a letter  to Treasury Secretary Steven Mnuchin last summer, Rep. Lamar Smith, R-Texas, asked for the administration to look into allegations that the Russian government has funded U.S. environmental groups surreptitiously in a “propaganda war against fossil fuels.”

>>> 6 Elements in Understanding the Tangled Uranium One Scandal

Such concerns have motivated lawmakers on the House and Senate judiciary committees to move quickly on his legislation, Johnson told The Daily Signal.

The letter from Smith, chairman of the House’s Science, Space and Technology Committee, describes how “publicly available reports connect the dots” of a complex scheme by the Russian government to “advance a political agenda with little or no paper trail” against the U.S. energy sector.

Smith cites government and other reports that Russia steers funds to U.S. environmental groups, often in the form of anonymous donations, so that those groups may bankroll what the Texas Republican calls “covert anti-fracking campaigns.”

“Russia has a long track record of funding ‘green’ groups as part of an effort to slow down, if not stop altogether, domestic energy production,” Luke Coffey, director of The Heritage Foundation’s Allison Center for Foreign Policy, said in an email to The Daily Signal, adding:

This has been particularly the case regarding fracking. European governments have also faced similar challenges from Russia, because Moscow knows that each barrel of oil produced in the USA or Europe is one less needed from Russia.

Ken Stiles, a 29-year veteran of the CIA, told The Daily Signal in a recent interview that congressional investigators identified a “money trail” suggesting a connection between the Russian government and activist groups opposing fracking operations and pipeline construction in vartious parts of the country.

As previously reported by The Daily Signal, Stiles suspects two anti-pipeline groups in Virginia are “agents of influence” unknowingly operating on behalf of Moscow under Russian President Vladimir Putin.

Those campaigns fell short of obstructing pipeline projects, but environmental advocacy groups have succeeded in blocking natural gas development in New York and other states.

“A very important consideration is whether these domestic forces among U.S. environmental groups actually know that they are being targeted and exploited by the Russians,” Paul Kengor, a Grover City College political science professor, said in an email to The Daily Signal.

“Moreover, if they are willfully working with Vladimir Putin’s Russia—deliberate collusion—then that would be egregious and a very serious matter demanding our government’s fully investigating the situation,” Kengor said.

“If these U.S. environmentalists are mere dupes,” he said, “that’s not legally or even morally as bad, but I think they’d have at least a moral obligation to change their ways if and once they’ve realized they’re being targeted and exploited.”

Finally, politically speaking, consider the striking irony here: We have the apparent possibility of liberals from the environmental movement working with and helping Putin and the Russians at the very moment that liberals have been screaming about alleged cooperation between the Trump presidential campaign and the Russians. Imagine that.

A 2016 report by the Justice Department’s inspector general highlighted deficiencies in the Foreign Agents Registration Act.

Johnson said his bill (H.R. 4170), which he shepherded through the House Judiciary Committee in January, would correct “serious deficiencies [that] allowed gross abuses of the law to go unchecked.”

The bill clarifies disclosure requirements while closing loopholes that allow some lobbyists for foreign entities to evade making such disclosures.

Johnson, Grassley, and other advocates of the changes seek to tighten registration obligations for foreign agents and add enforcement tools for U.S. government officials.

New reporting requirements are key, Johnson explained, because the government continues to permit some foreign agents to register under the Lobbying Disclosure Act, with its “much lighter threshold” for disclosure.

Johnson said a “big chunk of the bill” provides intelligence agencies with civil investigative authority they can use to determine whether there is “fire to the smoke” in instances where they suspect a group is violating the law.

In a phone interview Jan. 27 with The Daily Signal, Johnson said he not only is encouraged by bipartisan support but anticipates the changes could become law soon.

“This is not a partisan bill at all, because it transcends our policy disputes,” the Louisiana Republican said.

Grassley, in introducing his companion Senate bill in October, said:

Policymakers are here to serve the interests of the American people, so we need to know when someone is pushing the priorities of a foreign interest.

Unfortunately, we’ve seen time and again how lobbyists of foreign principals skirt existing disclosure laws to conceal their clients’ identities and agendas. Congress passed the Foreign Agents Registration Act to prevent inappropriate influence in domestic policy, but my oversight work has uncovered rampant disregard by foreign agents and lackluster enforcement by federal authorities. This bill seeks to correct those flaws by improving enforcement, compliance, and oversight.

Johnson said he expects the Senate to take up Grassley’s version of the bill within weeks.