‘Lack of Candor’ Cited Before in Surveillance Requests by Obama Administration 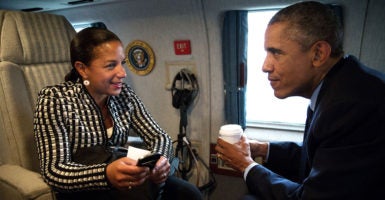 President Barack Obama talks with his national security adviser, Susan Rice, aboard Marine One en route to Stonehenge in England following the NATO Summit in Wales on Sept. 5, 2014. The Obama administration's use of surveillance has come under scrutiny since he left office. (Photo: Pete Souza/Zuma Press/Newscom)

A judge who is part of a secret court system criticized the Obama administration for “an institutional lack of candor” in seeking warrants to spy on U.S. citizens.

This scrutiny came in the form of a Foreign Intelligence Surveillance Court report, issued last spring in an investigation that began well before most of the public ever heard of opposition research firm Fusion GPS, former British spy Christopher Steele, or Trump campaign volunteer Carter Page.

The scrutiny also came long before the so-called Nunes memo raised questions about the Obama administration’s surveillance requests in late 2016 related to the incoming president, Donald Trump, and Russia.

The Trump administration recently agreed to declassify the memo from Rep. Devin Nunes, R-Calif., chairman of the House intelligence committee. In it, Nunes essentially accused the FBI of not informing a special court under the Foreign Intelligence Surveillance Act about the political origins of information used to justify surveillance of a Trump campaign volunteer.

A judge last year made a similar criticism of a different case involving the National Security Agency.

“The common denominator is the agencies were not fully transparent to the FISC [Foreign Intelligence Surveillance Court]. The comparison ends at that point,” David Shedd, a former acting director of the Defense Intelligence Agency, told The Daily Signal.

“The only thing that would describe a pattern is the absence of candor with the court,” Shedd said.

In the case Shedd recalled, the National Security Agency from 2011 through 2016, a five-year period, conducted illegal surveillance on American citizens, according to a 99-page rebuke by the judge issued April 26, 2017—three months after Trump was sworn in as president.

Judge Rosemary M. Collyer of the U.S. District Court for the District of Columbia, a member of the FISA court, signed the reprimand. It said the court learned in October 2016 that analysts at the National Security Agency were conducting prohibited databases searches “with much greater frequency than had previously been disclosed to the court.”

The Fourth Amendment protects Americans from unreasonable search and seizure.

What the court’s finding characterized as illegal searches were those NSA made of “upstream” data, which are more likely to contain emails and phone calls of people throughout the United States, whether citizens or not.

Obama named Navy Adm. Michael Rogers as director of the National Security Agency in 2014; Rogers continues to serve in the Trump administration.

Such cases as this, and the omissions outlined in the Nunes memo regarding the FBI and Justice Department officials, could endanger the Foreign Intelligence Surveillance Act as a valuable tool in fighting terrorism, Shedd said.

“The danger is less about the judges, who will take corrective action,” Shedd said. “The court of public opinion is a bigger concern when section 702 comes up for renewal [again]. This could undermine trust in the agencies with regard to FISA, which is an extraordinarily powerful tool.”

The declassified, four-page memo is commonly named for Nunes, chairman of the House Permanent Committee on Intelligence. The memo says FBI and Justice Department officials did not disclose to a federal judge the source of information used to justify the surveillance warrant for Page, a one-time Trump campaign aide, under the Foreign Intelligence Surveillance Act.

Much of that information was opposition research against Trump done by Steele and funded by the Democratic National Committee and the Hillary Clinton presidential campaign.

“There is no good reason not to disclose everything you know to the court,” Rivkin told The Daily Signal. “I hope there is no compelling evidence of a general lack of candor across FISA cases. It should be investigated if that is the case.”

Democrats on the committee, who voted against releasing the Nunes memo, have disputed parts of it.

Many civil libertarians oppose the existence of FISA. Whether it’s the NSA or the FBI, it requires full disclosure, candor, and context to the court. … The circumstances and context should require full disclosure since Carter Page is an American citizen.