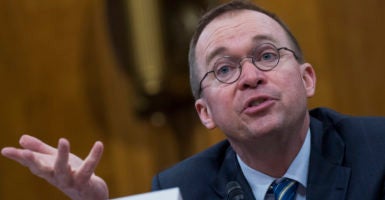 Most federal employees—99.7 percent, in fact—get a “performance based” raise each year under the government’s pay system.

“We’ve set up a $1 billion fund [to give] managers the ability to pay people whose performance merits the increase,” @MickMulvaneyOMB says.

President Donald Trump wants to change that as part of his new budget plan, in keeping with his campaign promise to “drain the swamp” of entrenched federal bureaucrats.

Such a sweeping reform, though, faces intense opposition from employee unions.

Trump’s proposal would change how federal employees are paid as well as ensure that the government can “hire the best and fire the worst,” according to a budget summary.

Federal workers are protected from being fired under a myriad of civil service protections. The complexity of firing federal employees came to the forefront in recent years amid cases involving employee misconduct at the Internal Revenue Service and the Department of Veterans Affairs in which the workers couldn’t be fired.

Moreover, employee pay hikes are more closely tied to years of working employment rather than performance under the “general schedule,” commonly called the “step” system. The pay scales assign “steps” to reflect the time an employee has worked for the government, increasing 3 to 5 percent per step.

Trump’s budget proposal calls for changes on both fronts.

“The proposal on hiring the best, firing the worst works like this: You’re going to see that we did not propose a civilian pay raise this year,” Mick Mulvaney, director of the Office of Management and Budget, said in response to a question from The Daily Signal during a press briefing Monday.

“Instead, what we’ve done is we’ve set up a $1 billion fund with an idea toward giving managers the ability to pay people whose performance actually merits the increase, as opposed to giving folks automatic increases.”

Mulvaney turned to a staffer for the percentage of employees getting raises each year, who affirmed it was 99.7 percent of career employees.

What we’d like to do is simply say, look, if you are one of those folks who really is a good government worker, you should get a raise. If you’re not, you’re not. In fact, our own internal studies at the government level point out that one of the top complaints by federal workers about their job is that their pay is not tied to their performance. And they see folks who they know aren’t pulling the weight getting the same increases that the folks who are pulling the weight are getting, and that’s very frustrating to them.

So one of the biggest things we’re trying to do through … the ‘M’ side of OMB … is to change the way that we hire and fire. But to this point, specifically, pay.

Federal unions, such as the American Federation of Government Employees, are ready to oppose the change.

“President Trump’s budget is nothing less than a road map for dismantling the career civil service and handing over our most sacred public institutions to political donors and party loyalists,” AFGE President J. David Cox said in a public statement. “Federal workers shouldn’t be hired or fired on the whims of political appointees whose allegiance is to their political party, not the country’s best interests.”

In June, Trump signed legislation to make it easier to fire employees at the Department of Veterans Affairs in response to the 2014 waiting list scandal. About 1,700 employees were removed under the new law, the Veterans Affairs Accountability and Whistleblower Protection Act.

The civil service reforms outlined in the president’s budget plan would in part expand the VA reform to other departments.

A bill already in the House would do most of what Trump has asked for. Sponsored by Rep. Barry Loudermilk, R-Ga., it is called the Modern Employment Reform, Improvement, and Transformation (MERIT) Act.

“Injecting accountability at the VA has delivered a better quality of care and treatment for our veterans,” Loudermilk told The Daily Signal in a statement Tuesday. “It’s time to ensure the same respect and diligence is given to all Americans by all federal agencies. The MERIT Act will provide a desperately needed update to federal law, ensuring efficiency, transparency, and accountability within the civil service—answering the president’s call to initiate the changes needed to indeed make America great again.”

Under current law, a supervisor must follow an extensive process documenting misdeeds of a federal employee, along with a lengthy appeals process. A private sector worker is 200 percent more likely to be fired than a federal employee, according to a 2016 Bureau of Labor Statistics report.