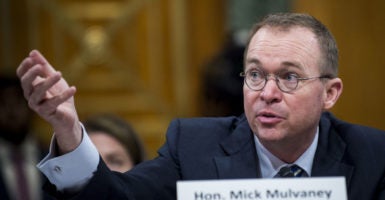 Mick Mulvaney, director of the Office of Management and Budget, testifies before the Senate Budget Committee about the president's fiscal year 2019 budget request. (Photo: Pete Marovich/UPI/Newscom) 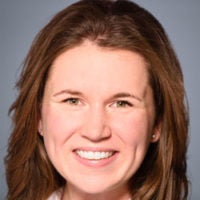 The Trump administration’s budget rightfully assumes that congressional Republicans should roll back Obamacare, which is currently having harmful effects on millions of Americans in the individual and small group markets. Obamacare continues to drive up health costs, decrease competition, and relentlessly reduce Americans’ health choices.

In a disappointing turn of events, the administration’s budget also allows for $11.5 billion in bailouts to health insurance companies participating in the Obamacare health insurance exchanges. This outrageous idea is completely inconsistent with President Donald Trump’s previous comments about ending bailouts to insurance companies—and his budget’s call to repeal and replace Obamacare.

It’s also the latest in a string of bad bailout ideas being floated by policymakers who once promised to repeal and replace Obamacare. Advocates for the idea of taxpayer bailouts say that they are necessary to lower health insurance premiums.

Real help to lower premiums requires removing Obamacare’s regulations, which are driving up costs and driving the need for taxpayer bailouts. Bailouts to insurance companies are corporate welfare and a distraction from truly needed reforms.

The proposed $11.5 billion would be used to pay claims on the so-called “Risk Corridors Program”—an Obamacare program that was supposed to be temporary. The program statutorily expired 14 months ago, and the insurers it was designed to fund have, in many cases, exited the market. Some have even gone bankrupt.

By all accounts, this was another failed government program.

To make matters worse, the proposal both asks for an appropriation and proposes to put the program in the mandatory baseline—indicating that insurers are to be the beneficiaries of federal funding as a form of entitlement.

And there’s more bad news: The idea is to exempt the $11.5 billion corporate welfare payment from budget sequestration, meaning federal spending on the program will be allowed to exceed the caps Congress just agreed to last week.

Taxpayers should realize that Congress itself explicitly prohibited spending for risk corridor payments. Incredibly, the Office of Management and Budget announced that it wants to spend the money anyway.

By taking this action, the Office of Management and Budget is undercutting the argument made by the Justice Department under both former President Barack Obama and Trump  that this program is no longer an obligation of the federal government.

As the late President Ronald Reagan once remarked, “The nearest thing to eternal life we will ever see on this earth is a government program.”

Rather than go down this road of bailouts and corporate welfare, conservative policy leaders continue to call on Congress and the Trump administration to focus their efforts on a real plan to reduce health premiums, improve health choices, and protect American taxpayers from corporate bailouts.

Instead of bailing out a fundamentally broken program, members of Congress and the administration should take heed of their recommendations, keep their promises to the voters, and pursue workable solutions that actually solve the very real problems created by Obamacare.

They need to get to work.