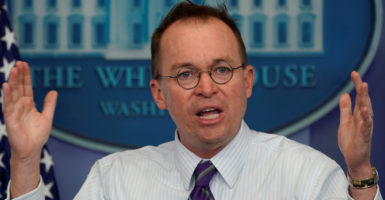 President Donald Trump is proposing a 10-year spending plan that never produces a balanced budget, and increases deficit spending by $7.2 trillion over the next decade.

“The first message [is] you don’t have to spend it all, but if you do, this is how you spend it,” Mick Mulvaney, director of the Office of Management and Budget, told reporters Monday.

“The second message is: We are not condemned to trillion deficits forever. There is a way out of this.”

Trump’s first budget proposal balanced the budget over 10 years. The current Trump proposal doesn’t come near to doing so.

The White House budget director noted that last year he said the longer Congress waits to make spending reforms proposed in the president’s fiscal year 2018 proposal, the more difficult it will be to balance the budget.

“They didn’t make any of the large structural changes we proposed. I probably could have made it balanced, but you all would have rightly excoriated us for using funny numbers, because it would have taken funny numbers to do it. These are real numbers.”

The proposal does attempt to bend the trajectory to lower deficits over 10 years by $3 trillion, according to the White House.

“It’s certainly alarming to us that the budget is not balanced at any point,” Justin Bogie, senior policy analyst in fiscal affairs at The Heritage Foundation, told The Daily Signal. “The budget may not matter as a policy matter, but it demonstrates the direction the White House is striving for.”

Romina Boccia, deputy director of the Thomas A. Roe Institute at The Heritage Foundation, called the budget a “mixed bag.”

“The president’s budget makes progress by investing in the military, eliminating numerous ineffective agencies and programs, and beginning the process of welfare and entitlement reform. However, the budget fails to balance, ever, and does not sufficiently move the country away from its currently unsustainable fiscal path,” she said.

The budget proposal fully funds the national defense strategy with $716 billion. This includes a 2.6 percent pay hike for troops.

Trump’s signature campaign issue, immigration and border security, gets a boost in the proposal at a time when Congress has started to debate how to address illegal immigrants brought to the United States as minors.

Mulvaney said he anticipates having a deal on Deferred Action for Childhood Arrivals recipients and the wall.

The budget proposal asks Congress for $23 billion for border security and immigration enforcement. Of that, $18 billion goes for a wall along the U.S.-Mexican border.

Also, $782 million would go to to hire 2,750 additional officers and agents at U.S. Customs and Border Protection and U.S. Immigration and Customs Enforcement.

Another $2.7 billion would go to pay for an average daily detention capacity of 52,000 illegal immigrants.

Trump is asking for $17 billion to fight the opioid abuse epidemic.

The Trump administration wants Congress to dedicate $85.5 billion in discretionary funding for the Department of Veterans Affairs for medical care.

Having already done away with the individual mandate, the chief financing mechanism of Obamacare, in the tax reform package that passed in late 2017, the Trump budget seeks to take another step on health care. The proposal includes the idea of $1.6 trillion in health care block grants to states, which was part of the bill sponsored by Sens. Bill Cassidy, R-La., and Lindsey Graham, R-S.C.

The budget proposal also calls for numerous civil service reforms to ensure the federal government can “hire the best and fire the worst.” The proposal largely deals with reforming the hiring system, moving to a more merit-based pay system for federal workers, and making it easier to fire bad employees. Trump already signed a similar reform in place during his first year, but it only affected the Department of Veterans Affairs. This reform is aimed across government.