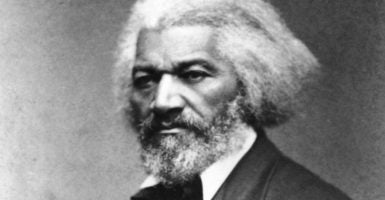 Frederick Douglass was an advocate for individualism, the right to bear arms, and economic freedom. (Photo: Glasshouse Images/Newscom)

It’s been more than 120 years since his death, but abolitionist and social reformer Frederick Douglass is still relevant to this day, experts say.

“One reason Douglass is relevant today is because he teaches us what classical liberalism has to offer to racial minorities,” said Timothy Sandefur, author of “Frederick Douglass: Self-Made Man.”

The title is a reference to Douglass’ most popular lecture “Self-Made Men.” In it, Douglass wrote, “Self-made men … are the men who owe little or nothing to birth, relationship, friendly surroundings; to wealth inherited or to early approved means of education; who are what they are, without the aid of any of the favoring conditions by which other men usually rise in the world and achieve great results.”

Sandefur made his remarks at a panel discussion Thursday at the Cato Institute, a libertarian think tank in Washington.

Douglass was a classical liberal, or what some would refer to as “libertarian,” in today’s terms, Sandefur said. He was an advocate for individualism, the right to bear arms, and economic freedom. The black abolitionist embraced the Constitution like few others and argued that it was an anti-slavery document.

According to Sandefur, Douglass believed that black Americans would succeed through their own efforts and once said, “If you will only untie their hands, I think they will live.”

Douglass’ legacy of abolition and his fight against human trafficking prompted Rep. Christopher Smith, R-N.J., to name a human-trafficking prevention bill after the historic figure.