An Admiral’s Prescription for ‘the Navy the Nation Needs’ 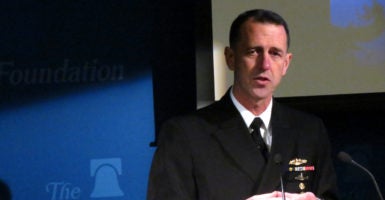 In the past 25 years, maritime traffic has increased 400 percent, and competition from the Russian and Chinese superpowers—or as Adm. John Richardson puts it, “‘great power’ competition”—is rising each day.

The U.S. Navy has not kept pace with that growth, he warned.

Richardson, the chief of naval operations, presented the case at the beginning of February at The Heritage Foundation for the Navy the nation needs, in which he outlined the seven dimensions to make the U.S. Navy great again.

“A balanced strategy … is more important than ever,” he said, noting that the national security strategy directs the military to “protect America, promote American prosperity, preserve peace through strength, and advance American influence throughout the world,” while the national defense strategy describes the “imperative” for confronting those challenges head-on.

The first step in modernizing the Navy is to “just build a bigger fleet.” Richardson pointed to studies, including one by Heritage, that concurred on the need for a Navy “in the neighborhood of 300 [to] 355 ships.” The U.S. currently has 92 forward deployed.

Just any fleet wouldn’t cut it, however, he said, adding it necessitates a better, more capable fleet. “That means, each one being more capable will sum up to more naval power,” he said.

The admiral cited new technologies “that would not only increase [the Navy’s] capabilities,” such as directed energy and high-powered microwave lasers, but that would also “get us on the correct side of the cost curve.”

Those ships, with more capabilities, need to network together, Richardson said. Building a network fleet, the third dimension, means integrating the new Navy.

“Not talked about enough,” he said, is the fourth dimension, building a “more talented fleet.” The people who operate the ships will need new training.

“As we consider a network fleet, we’re going to need some help. So this is the realm of artificial intelligence, of learning algorithms, of figuring out the optimal way to team together the people, our sailors, and machine assistance … and get to those decision-relevant bits of information as quickly as possible,” he said.

The fifth dimension is building what Richardson calls an “agile fleet.”

“Once we have built this fleet—we’ve modernized it, we’ve networked it, we’ve manned it with appropriately trained sailors with the assistance they need—we’ve got to figure out how we’re going to operate it,” he said.

The next dimension is turning that fleet’s potential power and potential energy into kinetic energy. “This is the ready fleet,” Richardson said. “Bring that fleet to life.

But none of the above is possible, he said, without a seventh dimension; namely, a stable source of funding.

That degrades strategic planning and the industrial base, he said, and affects national security.

In naval warfare, the admiral concluded, losers sink and winners sail away. “We want to be that Navy that sails away,” he said.