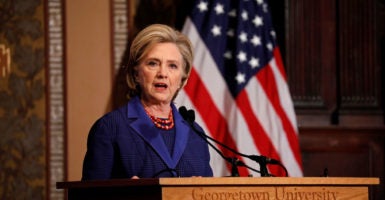 The memo suggests that some of the information being fed to Christopher Steele and included in his dossier did not come from highly-placed Russian sources, but from people associated with the Clintons.  (Photo: Aaron P. Bernstein/Reuters/Newscom)

While politicians, pundits, and the people continue to react to (and spin) the contents of the Nunes memo that was released last Friday, and await the release of the Democrats’ rebuttal, a new document has been released that contains tidbits of illuminating information.

On Jan. 4, Republican Sens. Chuck Grassley, chairman of the Senate Judiciary Committee, and Lindsey Graham, chairman of the Judiciary Committee’s subcommittee on crime and terrorism, submitted a letter to Deputy Attorney General Rod Rosenstein and FBI Director Chris Wray requesting that they consider investigating Christopher Steele for lying to the FBI, which is a federal crime.

Steele is the former British spy who was hired and paid $160,000 by Fusion GPS, a research company working on behalf of the Clinton campaign and the Democratic National Committee to do opposition research on Donald Trump. Steele is also the individual who produced a dossier that was used to support an application for a warrant to engage in electronic surveillance of Carter Page, a suspected foreign agent (wittingly or unwittingly) of the Russian government who was also working as an unpaid foreign policy adviser for the Trump campaign.

And it is Steele’s credibility, as well as allegations of political bias at senior levels of the FBI, that are the center of this dispute.

Attached to that referral letter was an eight-page classified memorandum (“Grassley/Graham memo”) setting forth the basis for the referral. Wray, very much to his credit, has declassified much (but not all) of the information in that memorandum, which has now been released.

As I wrote in a previous article, Former FBI Director James Comey has testified that the information in the Steele dossier was “unverified” at the time the initial FISA application was submitted, and, according to the Nunes memo, former Deputy Director Andrew McCabe testified before the House intelligence committee that “no surveillance warrant would have been sought from the [Foreign Intelligence Surveillance Court] without the Steele dossier information,” suggesting the FBI did not believe probable cause existed based on the information it gathered on its own.

Several Democrats have charged that the Nunes memo mischaracterized McCabe’s testimony and have implied that there was more than enough information in the FISA application to support issuing the warrant without information from the Steele dossier.

In their referral memorandum, Grassley and Graham, who have reviewed all four FISA applications in their entirety, “as well as numerous other FBI documents relating to Steele,” make statements which, assuming they are true, tend to support what is contained in the Nunes memo.

The Steele dossier contains explosive allegations that the Russian government, acting under orders from Russian President Vladimir Putin, was carrying out an operation to tilt the election in Trump’s favor and that the Russian government had compromising information of a financial and sexual nature against Trump that could be used to blackmail him at some point in the future.

Why the FBI Trusted Steele

The FBI, it seems, trusted Steele and relied on this information because of his background as a spy and because he had provided the bureau with reliable information on several occasions in the past.

According to the Grassley/Graham memo, the FBI stated in its initial FISA application that, “based on [Steele’s] previous reporting history with the FBI, whereby [Steele] provided reliable information to the FBI, the FBI believes [Steele’s] reporting to be credible.”

While that may have been so in the past, there was plenty of reason to distrust Steele in this case.

In addition to the fact that he was working on behalf of the DNC and Trump’s opponent in the presidential election, Steele detested Trump. A month before the government filed its first FISA application, Steele told Bruce Ohr, a senior Justice Department official whose wife worked for Fusion GPS, that he was “desperate” to see that Trump not win the election.

As disturbing as that is, another revelation in the Grassley/Graham memo is even more concerning.

The memo suggests that some of the information being fed to Steele and included in his dossier did not come from highly-placed Russian sources, but from people associated with the Clintons.

There has been some speculation that this individual may have been Sidney Blumenthal, a former senior adviser to President Bill Clinton and employee of the Clinton Foundation and a long-time close confidant of Hillary Clinton.

As the memo states, “[i]t is troubling enough that the Clinton Campaign funded Mr. Steele’s work, but that these Clinton associates were contemporaneously feeding Mr. Steele allegations raises additional concerns about his credibility.”

The nature of the lies that Steele may have told the FBI are also significant.

Given the fact that the information in the Steele dossier was “unverified” and was central to the FISA application, the FBI was looking for some, any, information that might be deemed corroborative. According to the Grassley/Graham memo, at the time of the initial FISA application, Steele had told the FBI that he had not disclosed the contents of his dossier to anyone other than the bureau and Fusion GPS.

Roughly one month beforehand, Yahoo News, presumably doing its own investigative work, published an article that, as the FISA application stated, “generally match[ed] the information about [Carter] Page that [Steele] discovered doing [his] own research … .”

According to the Grassley/Graham memo, the FBI affirmatively stated in the FISA application that it did not believe Steele was the source of the information that appeared in the Yahoo News article, which attributed the source of its information to “a well-placed Western intelligence source … .”

Steele, no doubt anxious to get his revelations into the public domain before the election, was leaking like a sieve. In addition to speaking to Yahoo News, Steele provided background briefings to CNN, The New York Times, The Washington Post, The New Yorker, and possibly other media outlets.

Shortly after the initial FISA warrant was obtained, Mother Jones published its own article in which Steele outed himself as an FBI confidential source, which prompted the FBI to formally terminate Steele’s designation as a trusted source.

Friends of Steele’s have stated that Steele was deeply troubled by what he learned during his investigation of Trump and that he felt like he was “sitting on a nuclear weapon.” Perhaps that was so.

But given the explosive nature of charges, the relationship of the target (Page) to the Trump campaign in the heat of a close election battle, the fact that Steele was paid by (and possibly given unsourced information by) the Clinton campaign, it was incumbent on the FBI to verify as much of this information as it could or, at the very least, to reveal to the Foreign Intelligence Surveillance Court every bit of information it had that might cast doubt on Steele’s credibility.

In summary, the initial FISA application and, most likely, the renewal applications, relied extensively on the credibility of Steele. Yet in addition to the fact that it failed to disclose the full extent of Steele’s known or potential bias in the initial application, when the FBI learned that Steele had not been truthful during the process, it did not, it seems, tell that to the FISA court.

As Graham has stated: “You can be an FBI informant. You can be a political operative. But you can’t be both, particularly at the same time.”

All attorneys before a court have a duty of candor, which means they must disclose “all material facts known to the lawyer that will enable the tribunal to make an informed decision, whether or not the facts are adverse.” Would the Foreign Intelligence Surveillance Court judge have signed the warrant if this information had been disclosed? We will never know.

This is, of course, a developing story, and more information will likely be revealed once the memo from Rep. Adam Schiff, D-Calif., is disclosed, assuming that it is disclosed.

Speaking of the Schiff memo, some Democrats have expressed the fear that the president, who must approve the memo’s release, will make “political redactions” to the memo to prevent the disclosure of information that will be unfavorable to him.  And some Republican sources have expressed the fear that the Democrats may have intentionally included highly sensitive information in their memo so that, if redacted by Trump, it would enable them to argue that the president is hiding something.

Let’s hope neither of these is true.

It is, of course, vital that the president protect against the disclosure of sensitive “sources and methods” that could imperil the integrity of current or future national security investigations. That having been said, it is also important that the public get to the bottom of what happened here. As I have previously stated, this “matter should be thoroughly and dispassionately (to the extent that is possible in Washington, D.C.) investigated. The matter is too important to do otherwise.”

A quote from McCabe has been corrected in this article.