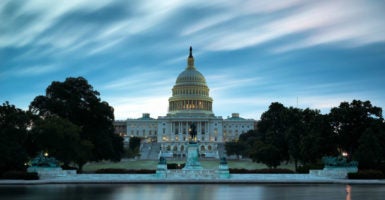 The plan would provide a much-needed boost to defense spending, but fails in almost all other areas. Over the next two years, it would raise the Budget Control Act caps by $296 billion with only a third of that being paid for.

This agreement would raise spending by $153 billion more than the previous two budget deals combined. It would guarantee that about a trillion dollars is added to the debt this year and is an affront to any remaining hope of fiscal responsibility.

Americans deserve better than another bad budget deal. Congress and the president should reject this plan and go back to the drawing board.

Here are five key things to know about the deal:

Defense spending has been hit particularly hard by the Budget Control Act caps. While comprising only around 15 percent of the federal budget, it has absorbed half of the law’s cuts.

Over the next two years, this agreement would increase base defense spending by $165 billion. This is a much-needed investment in our military’s readiness and preparedness capabilities and would put defense funding back on the right path. National defense is a core constitutional responsibility and should be prioritized by Congress.

In addition to the increases to base defense spending, the deal also allows for around $70 billion in Overseas Contingency Operations funds each year, which are not subject to the budget caps.

While some of these funds would be properly used to fight ongoing conflicts across the globe, tens of billions of dollars of it would be used to prop up base defense and State Department budgets. War funding should not be used as a slush fund to cover unrelated spending.

Moving forward, Congress should phase out Overseas Contingency Operations entirely and provide whatever funding is necessary for defense through the department’s base budget.

Increasing defense spending should be a top congressional priority, but the opposite is true of domestic spending.

Many of the programs that would receive additional funds under this deal fall outside of the scope and responsibility of the federal government. Others are flat-out wasteful and inefficient, and should be eliminated.

Within the federal budget, there are hundreds of agencies and programs competing for limited resources. Congress should use the budget process to carefully examine those programs and evaluate and prioritize them based on merits.

There are tens of billions of dollars in domestic spending that could be eliminated right away and used to pay for increased defense spending. With the national debt at an all-time high, getting the most out of taxpayers’ dollars should be more important now than ever.

3. Fails to pay for spending increases.

While the previous two budget deals also failed the test of fiscal responsibility, they did provide an opportunity for Congress to debate spending priorities and make trade-offs for discretionary increases.

On paper, both the Bipartisan Budget Acts of 2013 and 2015 fully paid for additional discretionary spending. While much of these savings were not realized for many years and some were gimmicky at best, Congress did make the effort to pay for increased spending with reforms to mandatory programs such as Medicaid and the Federal Employees Health Benefits program, and by extending mandatory sequestration.

In the latest deal, Congress has completely abandoned even the appearance of fiscal responsibility. Of the $296 billion in new spending provided by this bill, only about $100 billion is being paid for, and it relies mainly on budget gimmicks for these paltry offsets.

The bill would add $200 billion in deficit spending before accounting for disaster relief and additional mandatory spending authorized by the deal, such as the extension of the Children’s Health Insurance Program and more funding for community health centers.

This deal is a failure and a missed opportunity to make meaningful mandatory reforms.

4. Breaks the parity paradigm, but not in favor of national defense.

Republicans in Congress are touting this deal as a victory because it breaks from parity, i.e. one-for-one increases for defense and domestic spending.

On paper, this may be true. The deal would boost base defense spending by $34 billion more than nondefense. However, when spending outside the cap is included, this is simply not the case.

The plan includes $80 to $90 billion in disaster relief funding for ongoing hurricane and wildfire recovery efforts. This is on top of the more than $36 billion in uncapped spending that has already been appropriated for disaster relief this year.

While some of the disaster funding is warranted, much of it does not go toward the Federal Emergency Management Agency’s direct response and recovery efforts and should be appropriated within the budget caps.

Providing another debt limit suspension in conjunction with a massive spending increase is a mistake. Instead of taking steps to reform the debt limit, this deal would punt the issue past this year’s mid-term elections.

Congress should limit the debt with an actual number rather than waiving the statute through a suspension and should not increase the limit without cutting spending first. Mandatory reforms are imperative to controlling the national debt over the long term.

Congress’ latest budget-busting deal is irresponsible and moves the country in the wrong direction. The Budget Control Act is one of the few tools available to control federal spending. Instead of abandoning it, Congress should reform the law so that defense spending can be prioritized within the current overall cap.

The country cannot afford an irresponsible plan that welcomes back trillion-dollar deficits with open arms. Congress should reject this deal.