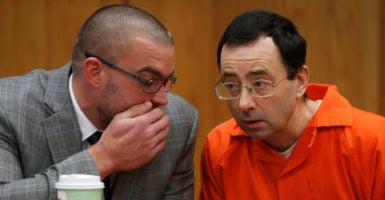 Everywhere I go, I carry a Spartans water bottle. I used to hope that someone on the street would yell to me, “Go, Green!” It would be a friendly Spartans cheer reminding me of my home campus, Michigan State University.

But now news reports refer to my school every day, emphasizing the horrific sexual assaults committed by Larry Nassar, the former USA Gymnastics doctor,  on MSU’s campus. Nassar, an osteopathic physician at MSU, molested and assaulted girls going back to 1992, prosecutors said.

With the media portraying MSU as a place that tolerates sexual assault, I now hide my Spartans water bottle in my coat jacket.

After brave female survivors told their stories of abuse in court, and once Nassar was sentenced to a lifetime in prison, the students of MSU called on President Lou Anna K. Simon to resign. And she did.

Now, John Engler, the former Republican governor of Michigan, has been brought in as interim president for MSU. Engler promised Wednesday that “change is coming” and he would treat this issue as if his own daughter were on the campus in East Lansing.

Less than an hour after Engler took over, though, students representing the College Democrats and similar organizations began shouting and interrupting reporters’ questions at a press conference featuring the former governor.

One student, with whom I’ve had the pleasure of sharing a class, proceeded to sit on a table and demand that students take part in a democratic process of electing our college’s president.

However, MSU students do not demand to elect their own student government officials directly. The student body president and vice presidents at MSU are voted into office by the student Senate.

The Senate itself is mostly comprised of individuals who are focused on social issues on campus instead of policies that could hold the university accountable.

If these students want to see some change, I challenge them to change the system so they can vote for the student body president and vice presidents who act as liaisons to the university president’s office.

This may be tough to swallow for these advocates, as the current system favors liberal candidates already in the student government.

There is irony in the fact that these student advocates speak of finding a permanent president to unite the MSU community. Yet they sit there splitting the community over petty partisan politics.

As the president of a conservative organization on MSU’s campus and as a female, I feel confident in the new leadership of Engler. Only those who do not respect his title or political party seem to be speaking out against him.

The five faculty members who are part of a small leadership group called the Steering Committee said they would prefer to see a woman as president, USA Today reported. Because the last woman president did such a great job, of course …

These few college students and these five faculty members who attended this meeting to attract media attention are the loud minority, not the silent majority.

Many other students just like me would like to one day walk down the street again proudly holding their MSU water bottles. Because they have an administration that makes them proud to be a Spartan again.