The Only Misleading Claim About Voter Fraud: ‘It Doesn’t Exist’ 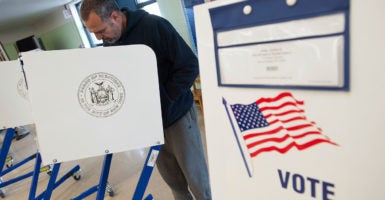 When it comes to election fraud, the question is not “if,” but “how much?” (Photo: Keith Bedford/Reuters/Newscom)

At the heart of democracy lies not just the right to vote, but the right to vote in a free and fair election. After all, what incentive do voters have to cast ballots if they have no faith in the integrity of the process or the accuracy of the outcome?

That is why, last year, President Donald Trump established the bipartisan Presidential Advisory Commission on Election Integrity. Its mandate was to investigate all manner of threats and challenges confronting the American electoral system and to propose solutions Congress and the states would be free to adopt, amend, or reject.

Now, six months later, the commission has been disbanded—not because, as some have suggested, it failed to uncover evidence of fraud, but because its work was obstructed and its mission discredited by liberal activist groups and politicians eager to advance and support an agenda antithetical to election integrity.

That their goal was to prevent even the study of this issue speaks volumes. If they are so certain that fraud doesn’t exist, that current safeguards are satisfactory, and that voter rolls are in good shape, why did they not view this commission as an opportunity to vindicate their position?

Perhaps they feared uncovering what they claim doesn’t exist; specifically, evidence of fraud in American elections.

When it comes to election fraud, the question is not “if,” but “how much?” For years, The Heritage Foundation has been documenting instances of proven election fraud in an online, searchable database.

As of this writing, Heritage has gathered 1,107 such instances, spread across 47 states. Each case is carefully researched and supported by court records or other government documents. Nearly 90 percent of those cases resulted in criminal convictions against individuals.

No unbiased individual can look at the Heritage database and see it as anything other than incontestable proof that fraud is a real and a serious issue demanding urgent attention.

Perhaps that is why the left now chooses to sidestep the database altogether. One recent example of this: In a Jan. 29 letter to the editor published in Lancaster Online, Ginny Gibble wrote:

I queried that database and found that it covers every year since 1984. There are two voting days (primary and election) in each of the 50 states each year in those 33 years.

To have 1,107 verified accounts of voter fraud in 3,300 elections including millions and millions of voters is minuscule.

Back-of-the-napkin mathematics aside, Gibble makes three major missteps in her critique of the Heritage database. First, she misleadingly presents it as a complete list of election fraud cases over many decades. It is not, and Heritage has made it abundantly clear that the database is only a small, illustrative sampling of election fraud.

In fact, to quote from my own op-ed, which apparently inspired Gibble’s reaction, “Heritage’s database is not comprehensive, so for every case we identify and track through to conclusion, many more likely go undetected or hidden in court records that are not easily accessible.”

Second, she assumes that each case in the database represents only one improper vote. The reality is that many cases involve far more than a single fraudulently cast ballot.

In 2013, Cincinnati poll worker Melowese Richardson was convicted of voting twice in the 2012 election, and in the names of others—including her comatose sister—in three other elections. Allan “Twig” Simmons went to jail on six counts of ballot fraud after persuading multiple individuals to let him fill out absentee ballots on their behalf in exchange for job offers.

Finally, Gibble’s claim that only a handful of fraudulent votes cast among “millions and millions” is “minuscule,” and therefore insignificant, fares no better.

In an age of tight elections, it does not take millions of votes to alter the outcomes of major races. The town of Pembroke, North Carolina, had no mayor for more than a year after the 2015 election was thrown out and ordered redone owing to fraud. In North St. Louis, Missouri, incumbent Penny Hubbard won the 2016 Democratic primary for the 78th House District by 90 votes, but her win was thrown out after it was discovered that fraudulent absentee ballots were cast. In the election do-over, Hubbard’s challenger won by more than 1,500 votes.

Are these cases inconsequential? It’s doubtful that the residents of Pembroke or the challenger in the Missouri House race would agree.

Gibble is hardly alone in falsely claiming that Heritage’s database is comprehensive so as to write it off as de minimis. The liberal Brennan Center for Justice made similar claims, as did NPR host Tom Ashbrook when he interviewed me last year.

Many liberal activists and politicians have demanded that election integrity advocates produce evidence to justify voter identification requirements and other measures intended to secure elections against fraud and malfeasance.

Now, it seems, they are revealing their true colors. Whether it’s deceptively critiquing the Heritage database or short-circuiting the election integrity commission, it’s abundantly clear that they aren’t seeking a well-informed public debate.

Rather, they desire the opposite: A political narrative sustained by willful ignorance of facts to the contrary.