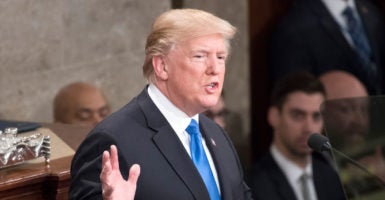 President Donald Trump spoke about reforming prisons and reintegrating inmates into society during his State of the Union address. (Photo: Ron Sachs/dpa/picture-alliance/Newscom) 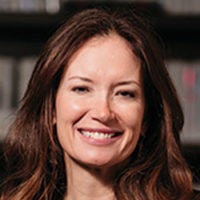 Brooke Rollins is president and CEO of the Texas Public Policy Foundation.

Criminal justice reform throughout the nation could be a major policy success story in 2018. So it was encouraging to see President Donald Trump commit to prison reform in his State of the Union address on Tuesday.

“As America regains its strength,” the president said, “this opportunity must be extended to all citizens. That is why this year we will embark on reforming our prisons to help former inmates who have served their time get a second chance.”

Justice reform occupies a unique place on the political landscape right now: All sides agree that it’s necessary, and believe it is achievable. States like Texas have led the way on this, and with the support of the White House and a bipartisan consensus on goals and metrics, much good can be done.

In practical terms, this means a reduction in the number of people who are sentenced each year to state and federal prisons (currently 600,000), and it means ensuring that those released are less likely to be re-arrested and re-incarcerated.

It also means significant savings for states as their prison populations begin to drop. And it means reunited families and restored communities.

What we discussed, and what the president committed to, was nothing less than a transformative vision for our nation’s approach to criminal justice. It wasn’t just talk. The president pledged to reconstitute the nearly-defunct Federal Interagency Reentry Council and he awaits the arrival of bipartisan bills from Sen. John Cornyn, R-Texas, and Rep. Doug Collins, R-Ga. Those bills would infuse the federal prison system with many of the policies that helped reduce recidivism at the state level.

The president’s commitment to reinvigorating the Federal Interagency Reentry Council is perhaps the most significant development. He vowed to refocus the council’s mission on rehabilitation and the reintegration of former inmates into their communities.

The council currently includes representatives from agencies that have no real connection to criminal justice reform—such as the Consumer Financial Protection Bureau and Federal Deposit Insurance Corp.—but excludes other more appropriate groups, such as the Bureau of Prisons, which was shockingly not a part of former President Barack Obama’s council. The president can simply change that with an executive memorandum.

The Cornyn bill builds on what we’ve seen in Texas. In 2007, the state was faced with rising prison populations. The Legislative Budget Board said we would need 17,000 more beds, at a cost of $2 billion, in the next five years.

Instead, legislators began to chart a course of reform. Policymakers, led by former Texas Gov. Rick Perry, expanded drug courts and other proven alternatives to incarceration for nonviolent offenders. Since then, Texas’ crime rate has declined 31 percent and the state has closed 8 prisons.

Following Texas, more than 30 states have implemented serious criminal justice reforms that have used some of the savings from reduced prison populations to hold former inmates accountable through supervision and treatment.

These are the successes we can build on nationally.

Cornyn’s bill, S. 1994, is the CORRECTIONS Act. It requires the Department of Justice to develop risk assessment tools and provide recidivism reduction programs for all eligible inmates.

Planning for an inmate’s re-entry into society will begin as soon as that inmate is sentenced, and inmates will be rewarded for their participation in these programs with credit toward less restrictive pre-release custody.

This new approach will be focused on people and relationships. Criminal risk will be evaluated at each stage of the process, and we will seek the good of the individual and the community he or she is returning to—because that’s where those prisoners are heading.

We know that 95 percent of the inmates in our prisons will eventually be placed back into our communities. Unless we address some of the factors that lead to recidivism—substance abuse, mental illness, a lack of opportunity, and most of all a surfeit of hope—most of these people will soon find themselves back behind bars. Our communities will be no safer, and our families will remain fractured.

The president’s role in this will be to use the power of the bully pulpit. Given that 90 percent of the criminal justice system and those incarcerated are under state and local control, the president and his team will achieve the greatest influence by captivating the nation’s attention and convening leaders from across the country to tackle this challenge.

Texas has led the way on criminal justice reform by demonstrating what a conservative approach to the issue can be. The results are safer streets, reconnected families, and stronger communities.

Note: This article has been updated to remove name of Gov. Nathan Deal, R-Ga. He did not attend the White House meeting on prison reform.