11 Touchstones for Trump in His First State of the Union 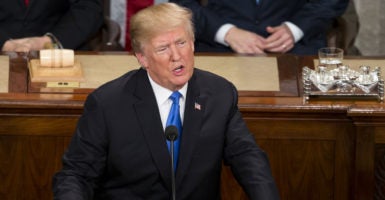 "Americans love their country," President Donald Trump tells a worldwide audience. "And they deserve a government that shows them the same love and loyalty in return." (Photo: Alex Edelman/Zuma Press/Newscom)

President Donald Trump heralded a strong economy and pressed for bipartisan deals on immigration and infrastructure in calling for a “new American moment” Tuesday night during his first State of the Union address.

“Americans are dreamers too,” @RealDonaldTrump says.

“In America, we know that faith and family, not government and bureaucracy, are the center of the American life,” Trump said. “Our motto is ‘In God we trust.’”

He added later: “Americans love their country. And they deserve a government that shows them the same love and loyalty in return.”

Lawmakers interrupted the speech 115 times with applause. It was mostly along partisan lines but also in unison as Trump saluted special guests watching from the gallery who ranged from the parents of a young man fatally brutalized in a North Korean prison to relatives of a teen girl slain by MS-13 gang members.

“It’s the people who are making America great again,” Trump said, echoing his campaign slogan as he neared the conclusion of the 80-minute address.

Here are 11 elements stressed by the president during the speech to a joint session of Congress and a worldwide audience 10 days following his first full year in office.

Speaking about a bill he signed into law last year to make it easier to fire bad employees at the Department of Veterans Affairs, Trump asked Congress for governmentwide civil service reform to advance his stated goal of “draining the swamp” of Washington.

“All Americans deserve accountability and respect—and that is what we are giving them,” Trump said. “So tonight, I call on the Congress to empower every Cabinet secretary with the authority to reward good workers–and to remove federal employees who undermine the public trust or fail the American people.”

For four decades, Trump said, Washington has tried and failed to solve its illegal immigration problem and “bring our immigration system into the 21st century.”

“I am extending an open hand to work with members of both parties—Democrats and Republicans—to protect our citizens of every background, color, religion, and creed,” the president said.

“My duty, and the sacred duty of every elected official in this chamber, is to defend Americans—to protect their safety, their families, their communities, and their right to the American dream. Because Americans are dreamers too.”

The line played on the term “Dreamers,” a word advocates use for those brought here illegally as children.

Trump’s proposal would provide amnesty for 1.8 million of those illegal immigrants brought to the country as minors. That is more than twice the almost 800,000 shielded from deportation under the Obama administration’s Deferred Action for Childhood Arrivals program, which Trump scrapped in favor of congressional action.

In exchange, Trump seeks an end to chain migration (the term for giving preference to extended family members of legalized immigrants), ending the visa lottery system, and $25 billion for increased border security, including a wall at the border with Mexico.

The Trump administration is pushing a $1 trillion public-private infrastructure proposal that would involve the federal government’s spending $200 billion to leverage $800 billion from state and governments and the private sector to rebuild roads, bridges, and other infrastructure.

“America is a nation of builders,” Trump said. “We built the Empire State Building in just one year—isn’t it a disgrace that it can now take 10 years just to get a minor permit approved for a simple road?”

“I am asking both parties to come together to give us the safe, fast, reliable, and modern infrastructure our economy needs and our people deserve.”

In touting the strong economy, Trump talked about the early success of the tax reform package passed late last year by Congress, called the Tax Cuts and Jobs Act.

At least 285 employers have announced bonuses for more than 3 million Americans after passage of the $1.5 trillion tax reform package, which decreased individual rates, slashed the corporate tax rate from 35 percent to 21 percent, and closed loopholes.

“Since we passed tax cuts, roughly 3 million workers have already gotten tax-cut bonuses—many of them thousands of dollars per worker,” Trump said.

“Since the election, we have created 2.4 million new jobs, including 200,000 new jobs in manufacturing alone. After years of wage stagnation, we are finally seeing rising wages.”

“The stock market has smashed one record after another, gaining $8 trillion in value,” the president said. “That is great news for Americans’ 401k, retirement, pension, and college savings accounts.”

Trump brought up the U.N. General Assembly’s vote of disapproval for the United States’ recognition of Jerusalem as the capital of Israel. He connected this to financial aid for countries that voted against the U.S.

“Shortly afterward, dozens of countries voted in the United Nations General Assembly against America’s sovereign right to make this recognition,” he said.

“American taxpayers generously send those same countries billions of dollars in aid every year,” Trump said. “That is why, tonight, I am asking the Congress to pass legislation to help ensure American foreign-assistance dollars always serve American interests, and only go to America’s friends.”

Earlier Tuesday, Trump said, he executed an executive order to keep the controversial detention center at Guantanamo Bay open to hold terrorists and other enemy combatants—a facility his predecessor President Barack Obama pledged to close down, but didn’t.

“I am also asking the Congress to ensure that, in the fight against ISIS and al-Qaeda, we continue to have all necessary power to detain terrorists—wherever we chase them down.”

The president also touted a strong national security record, highlighting military victories over the Islamic State, the brutal terrorist army also known as ISIS that has operated in Iraq and Syria.

“Last year I pledged that we would work with our allies to extinguish ISIS from the face of the earth,” Trump said. “One year later, I’m proud to report that the coalition to defeat ISIS has liberated almost 100 percent of the territory once held by these killers in Iraq and Syria.

“But there is much more work to be done. We will continue our fight until ISIS is defeated.”

Trump acknowledged that over his one year in office, America has experienced many hardships, specifying the Las Vegas massacre as well as natural disasters in Texas, Florida, Puerto Rico, and Louisiana, and wildfires in California.

He vowed that the rest of the country would stand with those suffering such trials, and celebrated the resilience and courage of the American people by returning again and again to the stories of special guests seated near first lady Melania Trump.

“With us tonight is one of the toughest people ever to serve in this House—a guy who took a bullet, almost died, and was back to work three and a half months later: the legend from Louisiana, Congressman Steve Scalise,” Trump said.

8. Standing for the National Anthem

Trump indirectly touched on the controversy over pro football players’ kneeling during the national anthem when talking about Preston Sharp, a 12-year-old boy from California who started a movement to place 40,000 flags on the graves of veterans.

“Preston’s reverence for those who have served our nation reminds us why we salute our flag, why we put our hands on our hearts for the Pledge of Allegiance, and why we proudly stand for the national anthem,” Trump said.

9. Preserving History and Its Monuments

On another controversial topic, Trump talked about the nation’s history and monuments that have come under attack. He referred not only to moves to remove monuments to Confederate generals during the Civil War, but demands to remove statues of presidents such as Thomas Jefferson and Abraham Lincoln.

“Monuments to Washington and Jefferson—to Lincoln and King, memorials to the heroes of Yorktown and Saratoga—to young Americans who shed their blood on the shores of Normandy, and the fields beyond. And others, who went down in the waters of the Pacific and the skies over Asia,” Trump said, suggesting the importance of understanding and remembering American history.

Trump asked Congress to pass legislation already embraced by almost 40 states to allow terminally ill patients to take experimental drugs. These are referred to as “right to try” laws.

“We also believe that patients with terminal conditions should have access to experimental treatments that could potentially save their lives,” Trump said.

“People who are terminally ill should not have to go from country to country to seek a cure—I want to give them a chance right here at home. It is time for the Congress to give these wonderful Americans the ‘right to try.’”

On another issue with bipartisan support, Trump talked about something he has worked on with governors: criminal justice reform geared at integrating former prison inmates back into society.

“As America regains its strength, this opportunity must be extended to all citizens,” he said. “That is why this year we will embark on reforming our prisons to help former inmates who have served their time get a second chance.”