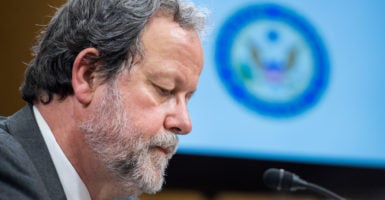 The Congressional Budget Office’s overestimation of future enrollment in Obamacare raises questions about the agency’s commitment to nonpartisanship, one of the Senate’s prominent budget experts says.

The CBO describes itself as being “strictly nonpartisan,”  Sen. David Perdue, R-Ga., told the budget office’s director, but the Obamacare estimates appeared to favor the Obama administration’s policy stand while being off by millions of Americans.

“It’s one thing to disagree with the projection. It’s another thing to look at reality and compare it back to the projections, which is what we do in the real world in business,” Perdue—the former CEO of Reebok—said during a Senate Budget Committee oversight hearing Jan. 24.

The Obamacare projections were off so much in each of the three years, Perdue said, calling them “100 percent errors,” that it raised questions in his mind about impartiality.

Perdue asked Hall: “Going forward, how do we assure ourselves that we’re getting a nonpartisan, objective viewpoint?”

The CBO director acknowledged the errors, and insisted that the office remains impartial and transparent. To remain impartial, he said, it seeks “guidance and advice” from experts on both sides of the political aisle.

The CBO aids lawmakers in the budget process, including by publishing analytical reports on the fiscal repercussions of proposed legislation.

Perdue and Hall agreed that it’s “really hard to estimate” Obamacare numbers in advance. The CBO’s estimates weren’t as off as others, Hall added.

“In fact, we were probably more accurate than most others,” he said, acknowledging that statement didn’t give Perdue a lot of comfort.

The CBO’s more accurate estimates compared to others actually “goes to the issue of [alleged] bias,” Hall said.

The budget office continually tries to fix the way it estimates things, the CBO director said, and they try to do so transparently and without partisanship.