I Support Trump Because He Has Delivered, Not Because He’s a Role Model 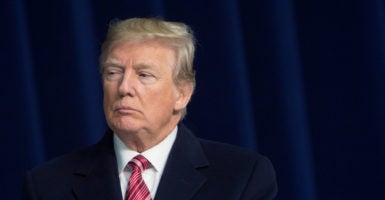 If there’s one thing I’ve always said, it’s that Christians should never check their faith at the door when they enter the public square. So, let me start by practicing what I preach.

Like you, I’ve heard all of the allegations about President Donald Trump’s past, his years of baggage and personal failings. I don’t pretend to know what’s true and what isn’t—certainly not now, in an environment as toxic as ours.

But there is a truth I do know: Faith in Jesus Christ calls us to live with moral clarity in everything we do. And that means calling sin, sin.

Earlier this week, in a lengthy interview published by Politico’s Edward-Isaac Dovere, I was asked about an accusation of infidelity that’s resurfaced against Trump from 2006. I explained to Dovere what I’ve said before: If this were happening today, his evangelical support would not exist. Adultery was wrong then, and it’s wrong now.

If the rumors turn out to be true, then that behavior is unconscionable. No question. Where wrongdoing is brought to light, it is exactly that: wrongdoing.

Trump has denied this latest allegation through his attorney, and we can find some comfort in his openness about his past mistakes.

“I’ve never said I’m a perfect person, nor pretended to be someone that I’m not,” he told Americans before the election when a vulgar tape surfaced.

“I’ve said and done things I regret. And the words released today on this more than a decade-old video are one of them. Anyone who knows me, knows these words don’t reflect who I am. I said it, it was wrong, and I apologize.”

As I said when that footage was released in October of 2016, his actions were inappropriate and disturbing. I did not then, and I will not now, try to rationalize or excuse this type of behavior.

But let’s also be realistic: Americans can only hold Trump accountable for what he does in office. We can’t do anything about the past. Americans may not like it, find it distasteful, and wish it hadn’t happened—but it did.

Like any of us, he needs to own his failings and take responsibility for his actions. And in some of these cases, I believe he did.

That’s why, in explaining how evangelicals could come to the point of supporting Trump, I told the reporter that we—of all people—understand new beginnings. So, our attitude toward Trump politically was, “You get a mulligan. You get a do-over here.”

Some people interpreted that statement—incorrectly—as excusing, or worse, condoning Trump’s past behaviors. Nothing could be further from the truth.

As I said again on CNN Tuesday night, I was not an early supporter of Trump because of his past personal conduct. But, after the candidate I was supporting dropped out of the race, it became a choice between Trump and Hillary Clinton. So, I began communicating what I thought it would take for Trump to gain evangelical support.

You may recall that we said he would: 1) need to commit to appointing pro-life judges, 2) choose a conservative pro-life, pro-family running-mate with a solid record, and 3) agree not to undermine or dilute the conservative GOP platform.

To my amazement (and several others’), he not only met, but exceeded the high bar we had set. No other Republican nominee had ever pledged to nominate “pro-life” judges. Trump put it in writing and released it to the nation.

This is all the more remarkable because I’ve worked on the GOP platform since 2004. And every election, we’ve had to battle the Republican presidential campaign on many conservative planks.

The Trump campaign not only didn’t fight us, it worked with us. As the GOP nominee, Trump embraced the platform, which helped turn the election from a contrast of personalities into an election about policies.

And what has he done since he earned our support? A lot of what he pledged to do. In fact, he’s done more than any recent president to advance the values and policies that are critical to making America a good and prosperous nation.

On CNN, I restated that our support of the president is conditional. If Trump were to stop keeping his promises or revert to the behavior of his past, evangelicals would quickly exit his base of support—and I would lead the way.

But the reality is, he has kept his promises, so why would we stop supporting him based on allegations of repugnant behavior from more than a decade ago? What’s changed since the election?

Does that mean we don’t wrestle with the president’s tone or cringe at some of his inartful tweets? Not at all. Character matters. Personal conduct matters. It’s up to us to use our influence to ensure that the president does his very best to live in a way that doesn’t dishonor his office or the American people.

But let’s also be clear: Evangelicals have never looked at Trump as a role model. They’re looking at his record as president.

As Rev. Franklin Graham pointed out:

When Dovere asked me if I vouched for Trump as a moral leader, I made it clear that I vouched for his leadership in delivering his promises. To this point, he’s making positive change in our country that evangelicals can support and all Americans benefit from.

I’m not saying his performance as president can buy him grace—only Christ can do that. And while evangelicals can give him a mulligan regarding their political support, only through repentance and God’s forgiveness can he have a totally new start.

I respect that there are some very frustrated conservatives out there, who the left is seeking to distract and divide. But if we care about the future of our nation, we have to deal in the present.

This isn’t blind allegiance on the part of evangelicals. This is reasoned support for a political leader who has made and kept his campaign promises.