Ban on Abortions After 20 Weeks ‘About Who We Want to Be,’ Lindsey Graham Says 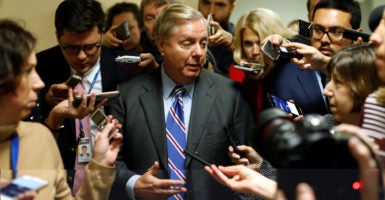 “It's 2018. Do we still want to be in one of seven nations that allow abortion on demand at 20 weeks?” Sen. Lindsey Graham, R-S.C., says. (Photo: Jonathan Ernst/Reuters/Newscom)

The Senate will vote within days on a measure limiting abortions after 20 weeks, Majority Leader Mitch McConnell, R-Ky., announced, prompting two of the chief sponsors to urge colleagues to pass the legislation.

“This vote is not about the Republican Party, it’s about America; it’s about who do we want to be,”  Sen. Lindsey Graham, R-S.C., who introduced the bill, said Thursday in a conference call with reporters the day after McConnell’s announcement.

“Here’s the question for the country,” Graham said. “It’s 2018. Do we still want to be in one of seven nations that allow abortion on demand at 20 weeks—the time in the pregnancy where young parents are encouraged to sing to the unborn child, because she’ll begin to recognize the parent’s voice?”

Graham’s bill would make abortion illegal after 20 weeks of pregnancy, providing a potential five years in prison, fines, or both for anyone who conducts such a procedure.

>>> Trump Ready to Sign Ban of Abortions After 20 Weeks

Exceptions in the Graham bill would allow an abortion after 20 weeks if the life of the mother is at stake, or the pregnancy is the result of rape or of incest against a minor.

“Why would you want to have abortion on demand at that point?” Graham said of the 20-week mark. “There is no good that comes from this. … This is not who America is, this is not who we want to be.”

“There is also significant scientific evidence that at five months of development, these babies can feel pain, yet there is no federal law protecting these vulnerable babies from abortion,” Ernst said.

Ernst recounted the story of a boy, Micah Pickering, 5, who was born at 22 weeks. Pregnancies normally last about 38 to 40 weeks.

“Little boys and girls like Micah are one of the many reasons why I joined Senator Graham in introducing this legislation,” Ernst said. “This bill would protect up to 10,000 lives like Micah’s every year by preventing abortions after about five months of development.”

Graham said he hopes to have bipartisan support.

“The reason we are going to get a bipartisan vote is because Democrats and Republicans, when they are informed about this, kind of rally to the cause,” Graham said, adding:

When people understand what we are trying to do, ladies and gentlemen, they’re going to be with us. What are we trying to say? If you can make it to the fifth month as an unborn child, we want to stop abortion on demand, because nothing good comes from that.