In Immigration Debate, Senators Must Put Americans and Their Dreams First 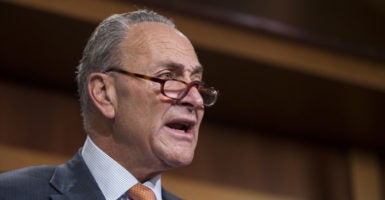 The just-paused Schumer Shutdown of the federal government brought to mind one of the most surprising headlines I’ve ever read.

If that pie came into the country illegally, I guess they’d be right. But I don’t think that was their point. Instead, Schumer and Pelosi were trying to convince readers that the term “American” no longer means being a legal U.S. citizen.

Doubtless, many readers chuckled at the headline and moved on. But given the federal government shutdown that just transpired because of this issue, the joke’s no longer funny.

The shutdown is over—for now. In exchange for Schumer’s support, the Senate will vote on whether to let as many as 800,000 illegal immigrants stay in the U.S. And if that vote doesn’t go his way, there’s no guarantee Schumer may not again prevent the federal government from being funded.

Meanwhile, members of our military are on the front lines defending our liberty. Cities and towns all across America are challenged by stretched resources. Families are working hard to put the Obama recession behind them. And parents are praying a wall will soon be built to keep their kids safe from criminals coming across our border.

But instead of helping them, Schumer and his liberal colleagues seem to prefer asking Americans to defer their dreams for those of illegals.

Right now, there’s a teenage girl in Appalachia who dreams of a great education but sits in a school that isn’t delivering. A factory worker who dreams of regaining work that went overseas earlier this decade. An urban mom who dreams of health care for her son but has to wait in an overcrowded emergency room.

These are all dreamers. And they’re Americans.

One of America’s great civil rights leaders, Jordan was the first African-American elected to the Texas Senate since Reconstruction. She was also the first Southern black woman elected to the House of Representatives, and an eminently worthy recipient of the Presidential Medal of Freedom.

Jordan also served as chairwoman of the U.S. Commission on Immigration Reform, where she said some things that Schumer would benefit from considering. “For our immigration policy to make sense,” she said, “it is necessary to make distinctions between those who obey the law, and those who violate it.”

She also said: “One thing is very clear: Illegal immigrants are not entitled to benefits.”

Today, however, Jordan’s words seem to be forgotten by liberals who oppose deportation of illegal aliens, support government-paid lawyers for illegals in immigration courts, and call for more money to be spent on services for illegal immigrants.

All of these costs are being borne by Americans. And those extra costs make it harder for Americans to realize their own dreams.

Such is the impact when politics is prioritized over the America people. Just in my own community, African-Americans who are working to get back on their feet are finding it harder than ever, due to the huge number of illegal immigrants who are competing for some of the same jobs.

The impact is particularly harmful to young Americans who depend on low-skilled work to earn a living and get their start up the economic ladder. Similarly, many of those who have found work are discovering they’re being paid less because of the competition they now face from illegal immigrant laborers.

Instead, America’s decisions about who to let in historically revolved around what was in the nation’s best interests. And it is clear that America’s interests have not been served by amnesty and open borders.

Americans are best served when our leaders uphold the rule of law, honor the process of legal immigration, protect our borders, and base all policy decisions on the impact they will have on America’s citizens and our future.

So when the Senate returns to this issue in the coming days, I hope senators will keep in mind one thing: Our nation has always been happy to help—and has always put Americans and their dreams first.