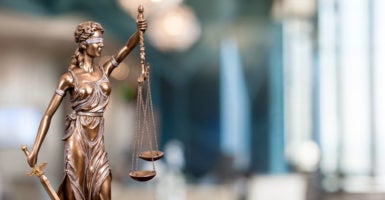 Some members of Congress are seeking to promote "trauma-informed investigation," an approach to sexual assault cases that gives privilege an accuser's testimony. (Photo: iStock Photos)

A group of bipartisan congressmen have introduced a bill in the House of Representatives that would award monetary grants to law enforcement and related agencies that use so-called “trauma-informed investigation” for handling cases of sexual violence and stalking.

The money distributed under H.R. 4720 would directly fund training programs that instruct relevant personnel on a “trauma-informed” approach to crimes of sexual violence, informed by “the fundamentals of the neurobiology of trauma [and the] impact of trauma on victims.”

H.R. 4720 pursues the admirable goal of promoting justice in the interests of victims. However, despite these good intentions, it fails to achieve that goal and instead promotes a scientifically unsound pseudo-science and a criminal justice theory completely at odds with well-established concepts of procedural due process.

Congress should reject this effort to fundamentally alter the role of the impartial police investigator.

What is a ‘trauma-informed’ investigation?

Trauma-informed investigative practices are an offspring of the “Start by Believing” campaign, launched in 2011 by End Violence Against Women International as part of its goal to “transform the way we respond to sexual assault.”

As the name suggests, the basic premise of the campaign is to dramatically reconstruct the role of law enforcement officers, detectives, and other investigators of sexual assault by training them to focus on how the complainant could be telling the truth despite evidence to the contrary.

Under this approach, investigators should no longer be neutral, third-party fact-gatherers, but agents of the person alleging sexual assault. They should assume all complainants are genuine victims and must find ways of making even inconsistent, inaccurate, and exculpatory evidence support the complainant’s allegations.

“Trauma-informed investigation” theory attempts to cloak “Start by Believing” with an air of scientific credibility, instructing investigators and adjudicators of assault claims to consider the “neurobiology of trauma” and how it affects an alleged victim’s behaviors and ability to recall information.

Proponents of this theory claim that trauma—such as being sexually assaulted—often causes a disabling physiological response that severely inhibits victims’ memories of an event, limits their cognizance of time frames, and results in actions otherwise considered abnormal by a passive observer.

In layman’s terms, “trauma-informed” investigators are told to ignore standard red flags, such as inconsistent accounts, counterintuitive behavioral responses, and even factually wrong statements, because these things are normal from trauma victims.

In fact, because these are the exact type of responses expected of “real victims,” their presence should be interpreted as evidence that the complainant experienced psychological trauma and must be telling the truth.

There are two substantial problems with the use of a “trauma-informed” approach to criminal investigations.

First, it is based on “junk science” with no grounding in reality. Second, its use necessarily destroys very important due process safeguards, effectively stacking the deck against any person accused of sexual assault and increasing the risk of erroneous convictions.

It is absolutely true that victims of trauma will respond to the experience in a variety of ways, some of which may be out of step with how even the victim thought he or she would react.

It is also true that people who experience the most severe cases of trauma—such as those who spend time in war zones—may have gaps in their memory of the events. Such gaps can also exist due to the presence of drugs or alcohol, which limit the brain’s ability to form and retain memories.

However, there is no scientific support for claims that victims of trauma store infallible, but “fragmented,” memories, as proponents of the neurobiology of trauma contend.

In fact, many studies seem to indicate an opposite conclusion. As Richard McNally, a Harvard psychology professor and expert on trauma and memory, notes in his book “Remembering Trauma,” extreme stress is known to often enhance the subsequent recall of life-threatening incidents.

This is not to say that this enhanced recall will always be present, but it is certainly not evidence tending to support a theory that victims of trauma suffer from memory-recall problems as a general rule.

Equally disturbing is the apparent lack of concern from proponents about the well-documented malleability of memory, or the very real likelihood that complainants can be vulnerable to post-event suggestions that lead them to label consensual acts as rape.

As one writer from The Atlantic has noted, the neurobiology of trauma theory is eerily reminiscent of the “repressed memory” scare of the 1980s and 1990s, which is now widely regarded as “psychiatric folklore devoid of convincing empirical support.”

The use of “trauma-informed investigation” in criminal cases also poses significant, perhaps even irreconcilable, constitutional problems. Under the Fifth and 14th Amendments, no person may be deprived of life, liberty, or property without due process of law.

Procedural due process ensures that a defendant facing criminal charges receives adequate and fair proceedings for the determination of his guilt or innocence. Although what constitutes “fairness” is relative and may depend on the circumstances of the particular defendant (Snyder v. Massachusetts), there are certain safeguards that the Supreme Court has determined are absolutely necessary to the provision of procedural due process.

The presence of an impartial investigator concerned with separating fact from fiction—one who does not take sides, but who gathers and analyzes evidence in a neutral light—is a principle vitally important to the concept of fundamental fairness.

Like the presumption of innocence and the use of a reasonable-doubt standard, the use of neutral investigators is a prime instrument in reducing the risk of convictions based on factual errors.

One poignant illustration of just how devastating “trauma-informed” investigations can be to due process is the case of a male former student at the University of Oregon who is now suing the school and several school officials after finally having his suspension for sexual assault overturned by a judge.

The student, known only as John Doe, was accused of rape by a female student, whose inconsistent—and sometimes blatantly false—testimony was either ignored or, worse, weaponized under the “neurobiology of trauma” theory as proof that she was raped.

The stunning ways school investigators managed to ignore the overwhelming weight of the evidence is detailed in John Doe’s complaint, which was filed in federal district court.

If Congress is truly worried about helping victims of sexual assault, it will not fund training programs designed to obfuscate the due process rights of every person accused of this heinous crime.

Due process safeguards are not obstacles to be overcome or avoided. They are, on the contrary, precious protections of liberty to be cherished in a free society that values justice and equality before the law.

Depriving defendants of due process rights does not make justice easier to obtain, but harder to obtain, because it taints convictions with the most conscience-damning burden known to a just society; namely, doubt.

When the even-handed and fair nature of a society’s justice system sits in doubt, its legitimacy as an institution sits equally in doubt.

This article has been corrected to reflect the political parties of the lawmakers introducing the bill.