Homeschooling Is Not a Crime 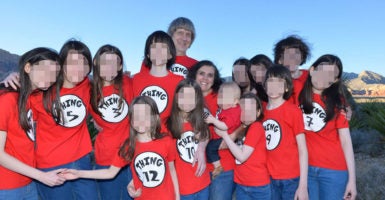 David and Louise Turpin were arrested on Jan. 14, 2018, on torture and child endangerment charges after a 17-year-old girl escaped from the California home where she and 12 of her siblings were held captive, shackled to beds and malnourished by their parents. (Photo: Facebook/UPI/Newscom)

It’s elementary. Education control freaks will use any excuse to crack down on competition. With 2 million K-12 students now educated at home (including our 9th-grade son), the temptation to exploit the most marginal cases of alleged child abuse by homeschoolers has proven irresistible to statist politicians and government apologists.

Take the case of David and Louise Turpin’s 13 starving children, reportedly found tethered to their beds after one of the siblings escaped and contacted police. The Turpins’ “house of horrors” in Riverside County, California, grabbed international headlines last week—and lured a parade of publicity hounds. Former neighbors in Texas claimed they suspected physical abuse by the parents but did nothing at the time. These thirsty fame-seekers will, however, be appearing on “Dr. Phil” later this week to slurp up their 15 minutes of leechdom.

Louise Turpin’s half-sister, Teresa Robinette, who also sat on the sidelines for years, miraculously found the energy and motivation to wake up early for an interview on NBC’s “Today,” where she gregariously gossiped about family secrets.

Another of Turpin’s sisters, Elizabeth Flores, dry-cried and show-sniffled on ABC’s “Good Morning America” about her “love” for the Turpin children whom she claims to have tried to Skype unsuccessfully “for 20 years.” How heroic of her. Flores also confessed that David Turpin allegedly spied on her while she showered. For some reason, it was more urgent for Flores to report this information to “GMA” anchor Robin Roberts and millions of strangers tuned into the boob tube than it was to tell her sister. Or her nieces and nephews. Or authorities.

But instead of training tough scrutiny where it belongs—on the parents, relatives, and acquaintances of the alleged victims—California legislators and narrative-shaping liberal journalists have instead directed their wrath at homeschooling.

The Turpins had filed required paperwork with the state registering their supposed home school, the Sandcastle Day School, as a “private school.” Several court cases in California have upheld the right to homeschool. Parents have the option to sign an affidavit establishing a home-based educational program, hire credentialed tutors, or register with an independent study program.

The deep, wide, and vast majority of homeschoolers nationwide are loving, excellent, and responsible instructors and parents. Yet, public school lobbyists have marginalized them as amateurs, weirdos, and menaces who don’t have the intelligence to raise and educate their own children. Democratic legislators in California have sought to undermine homeschoolers’ autonomy with intrusive legislation, such as a bill proposed last fall that would have required parents to allow inspectors to search their residential bathrooms for state-mandated feminine hygiene products for female students.

In New York City, incompetent nanny state bureaucrats have routinely harassed homeschooling families and falsely accused them of “educational neglect” after losing their paperwork. Homeschooling mom of two, Tanya Acevedo, who is suing the Big Apple, told my CRTV.com program how bureaucratic snafus that classified her son as a truant led to a Child Protective Services investigation.

“You start to question yourself as a parent when they come through those doors,” Acevedo recounted. “My child, he eats three meals a day, he’s well taken care of, and I felt that there was no need for them to be knocking at my door. … it was a really scary and really nerve-racking experience.”

For her crime of exercising educational self-determination, Acevedo was treated as guilty of child abuse until proven innocent.

The idea that there is something especially sinister and crime-enabling about homeschooling—The Week’s Damon Linker warned darkly of the “sickening danger of home-schooling,” for example, and NPR invoked the specter of a “cult”—betrays an all-too-common bias against parental autonomy that ignores the government’s own gross misconduct.

Yet, the vultures of political opportunism are using the plight of the Turpin children to impose expanded control over all homeschoolers in the Golden State. California Assembly member Jose Medina, D-Riverside, plans to introduce a bill requiring that “mandated reporters” designated by the state Department of Education conduct annual assessments in all home schools.

Echoing Medina’s concern for “the lack of oversight the state of California currently has in monitoring private and home schools,” liberal New Republic writer Sarah Jones decried how “lax homeschooling laws protect child abusers.” She pivoted quickly from the Turpin tragedy to an attack on the homeschool movement’s academic achievements and opposition to mandatory kindergarten.

Fundamentally, the homeschool crackdown caucus views the very freedom to educate one’s own children as a threat to government authority. In the name of liberating the Turpin children, they seek to keep the rest of us homeschooling families in regulatory chains.