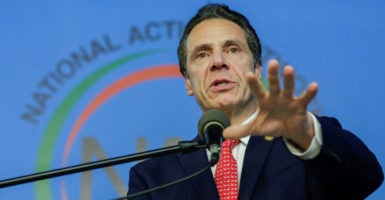 High-tax states such as New York, California, and New Jersey are spending significant time and resources trying to concoct ways for their high-income residents to evade federal taxes.

This strategy is in direct response to the newly enacted Tax Cuts and Jobs Act, which caps state and local tax deductions from federal income taxes at $10,000 per taxpayer. But legislators in high-tax states who wish to prevent the wealthy from fleeing to lower-tax states should lower the cost of local and state government instead of ducking federal taxes.

The $10,000 cap in the state and local deduction is irrelevant for most taxpayers.

For starters, 70 percent of taxpayers don’t itemize their deductions when filing their federal income taxes. These taxpayers benefit instead from the standard deduction.

Since the Tax Cuts and Jobs Act nearly doubles the standard deduction, The Heritage Foundation estimates that about 85 percent of taxpayers will not itemize deductions. And the state and local tax deduction is worth nothing to taxpayers who don’t itemize.

It’s primarily high-income taxpayers in high-tax states who will be affected most by the change in federal tax law. And that’s why lawmakers in those states are trying to find ways around the law.

Instead of trying to pass the buck of their big-government costs to federal taxpayers in lower-tax states, policymakers in high-tax states should just reduce their own state taxes.

As U.S. Rep. John J. Faso, R-N.Y., aptly said: “The solution is to lower the cost of government in New York and make our state a place where businesses can create jobs so our people don’t have to flee.”

Rather than address New York’s own high-tax problems, Gov. Andrew Cuomo, a Democrat, is proposing a new payroll tax on employers that would be deductible at the federal level.

But a new payroll tax on employers—one that would be in addition to existing income taxes—could hurt workers, businesses, and government revenues by discouraging companies from locating in New York. Such a tax would be extremely complicated and have disparate impacts on workers and businesses across the state, creating big boons for some and losses for others.

New York already has experienced the largest outmigration of residents of any state in recent years. State officials don’t need to exacerbate that with higher or more complex taxes.

Another idea being considered by states such as California and New Jersey is to circumvent the new cap on state and local tax deductions by setting up state-run charitable institutions to fund the government. Taxpayers who make donations to those institutions would receive a dollar-for-dollar reduction in their state tax bills.

Rest assured, even if states such as New York and California manage to circumvent new federal limits on state and local tax deductions, the IRS will implement new rules to enforce the intent of the cap. Instead of reducing total taxes for residents, the result could be higher taxes because high-tax states may not fully abandon their newly generated “workaround” revenue sources.

These highly taxed residents don’t need their governments spending more time and resources trying to evade taxes or create new, hopefully deductible taxes. Instead, they need state policymakers to make their governments more efficient and accountable; to limit nonessential government services; and to cut out waste and redundancies.

If states reduce government costs to more reasonable levels, residents will have more money in their pockets and fewer will be affected by the new cap on state and local tax deductions.

It’s time for lawmakers in high-tax states to throw in the towel on their efforts to shift their high-tax burdens onto federal taxpayers in other states, and instead focus on reducing the taxes they charge their residents.