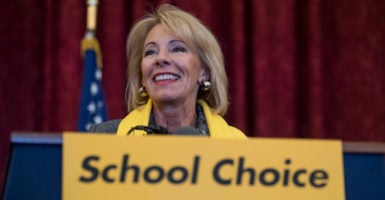 U.S. Secretary of Education Betsy DeVos speaks during a rally to promote the importance of school choice as part of National School Choice Week, in Washington on Jan. 18. (Photo: Tom Williams/CQ Roll Call)

In her first major policy address of 2018, Education Secretary Betsy DeVos criticized the education policies of the Obama and Bush administrations, and laid out plans for the future of education reform.

DeVos has made school choice and reducing the role of the federal government in education two of her priorities as the Trump administration’s education chief. She also is working toward fulfilling President Donald Trump’s 2016 campaign promise to end Common Core—the education initiative that outlines what students should know in math and language arts at the end of each year of K-12 schooling.

I will end common core. It's a disaster.https://t.co/d83XYrqZ3m#MakeAmericaGreatAgain #Trump2016 pic.twitter.com/r0Sc6zm80I

“I agree—and have always agreed—with President Trump on this: Common Core is a disaster,” DeVos said in recent remarks at the American Enterprise Institute.

“And at the U.S. Department of Education, Common Core is dead,” DeVos added.

“It’s about educational freedom,” she said, expressing support for school choice. Opponents of school choice could repeal every state and local school choice measure, but it “wouldn’t go away,” she said. “There would still be school choices … for the affluent and the powerful.”

DeVos said the “federal first” approach did not start with the federal No Child Left Behind law under President George W. Bush and noted how the federal government created the Department of Education under President Jimmy Carter in the late 1970s. She said federal mandates “distort” what the education system should be, which is “a trusting relationship between teacher, parent, and student.”

Even with the creation of the federal Education Department, she said, most classrooms today look “remarkably similar” to those of 1938, the year the American Enterprise Institute was founded. “Our societies and economies have moved beyond the industrial era, but the data tell us education hasn’t,” she said, contrasting it with how retail has changed over the past 80 years, from general stores to websites.

Each time the federal government has passed education reform legislation, such as with No Child Left Behind, which “did little to spark higher scores,” it has not changed “the system,” DeVos said. “Each attempt has really just been a new coat of paint on the same old wall.”

It’s not just the amount of education funding, either, DeVos said. “The fact is the United States spends more per pupil than most other developed countries, many of which perform better than us in the same surveys.”

Additionally, the Obama administration’s School Improvement Grants, which sought to fix targeted schools by “injecting them with cash,” cost $7 billion with little to show for it.

DeVos didn’t knock all of President Barack Obama’s policies, however. She said the Every Student Succeeds Act “charted a path in a new direction” and “is a good step in the right direction, but it’s just that—a step.”

DeVos said she thinks equal access to a quality education “should be a right for every American, and every parent should have the right to choose how their child is educated.”

She added, “I trust parents and teachers, and I believe in students.”