A Report on Terrorism That Falls Short on Useful Details 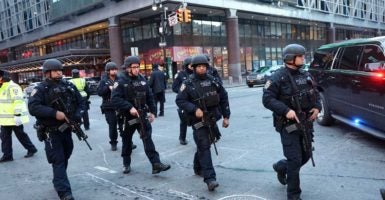 A new government report on terrorism uses data selectively to produce skewed conclusions on the percentage of acts of terrorism committed in the U.S. by those born in another country.

In a quick read, the Jan. 16 report from the Department of Homeland Security and the Justice Department appears to demonstrate that foreign-born individuals committed approximately 73 percent of terror crimes from Sept. 11, 2001, through Dec. 31, 2016.

The joint report says its goal was to provide statistics that would help to develop policies that would be effective in “protecting [American] citizens from terrorist attacks.”

To achieve this goal, it makes sense that the report should analyze all data on terrorism committed in the U.S. However, the report selectively uses data in three ways, resulting in the slanted conclusions.

What the report fails to include are cases of domestic terrorism—attacks on U.S. soil committed by individuals not connected to international terror groups. So for example, the report excludes eco-terrorism or neo-Nazi terrorist activities.

It certainly can be of value to analyze specific types of terrorism; but the focus on international terrorism reveals why the report concludes that foreign-born individuals are more likely to be involved in acts of terror.

While many of these individuals could be linked to Islamist terrorism, the data is not transparent. It likely includes terror groups from the Irish Republican Army to the Cambodian Freedom Fighters. The report would have been more helpful if it had at least laid out the types of terror groups involved and their sizes.

Second, the report says its data includes offenses such as “fraud, immigration, firearms, drugs, false statements, perjury, and obstruction of justice” in counting cases of international terrorism. Adding these events into the mix is not transparent at best, but deceptive at worst.

While the report claims that such crimes are related to international terrorism, it is impossible for readers to confirm the validity of these classifications without access to detailed accounts of the individual events. If the government can’t provide this data, it would better serve the public by providing an accounting of cases of explicit terrorism crimes.

Third, and as noted in a Lawfare article, an earlier version of the dataset “included almost 100 foreign-born defendants who were extradited into the United States and therefore never would have been affected by U.S. immigration policy.”

Extradition is completely different from voluntary migration and refugee flows. So these convictions numbering in the hundreds—if indeed included in the report—should be addressed separately if the Trump administration wants to make an argument about the connection between immigration and terrorism.

The government should provide data that is transparent, clear, and properly gathered and analyzed. This report falls short and officials ought to improve it to provide policymakers and the American people with the best information with which to make decisions.

The Heritage Foundation has tracked all Islamist terror plots and attacks on U.S. soil that have occurred since 9/11.

The information recorded in the Heritage timeline provides an accurate and transparent display of the individuals behind acts of terror against the U.S.

We must identify and understand the nature of the threat if we are to develop public policy that effectively addresses it. To do this, we need better, accurate data from the Trump administration.