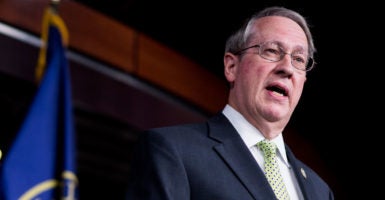 An influential caucus of conservative Republicans is pushing House Speaker Paul Ryan to hold a vote on an immigration reform bill that has emerged as a White House favorite.

The 150-member Republican Study Committee announced Tuesday that it endorses the Securing America’s Future Act, which gives legal status to certain younger illegal immigrants in exchange for a host of conservative immigration reforms.

Critically, the bill contains provisions on the three concessions demanded by President Donald Trump as part of amnesty for recipients of the Deferred Action for Childhood Arrivals program: border wall funding, limits on chain migration, and an end to the Diversity Visa Lottery.

The RSC’s steering committee voted to back the bill, co-authored by Rep. Bob Goodlatte, R-Va., chairman of the Judiciary Committee, and called for a floor vote in the House.

“The Securing America’s Future Act is the framework to strengthen border security, increase interior enforcement and resolve the DACA situation,” the steering committee said in a statement, according to CNN. “We believe an eventual stand alone floor vote is essential. We oppose any process for a DACA solution that favors a backroom deal with Democrats over regular order in the House.”

The RSC’s endorsement puts pressure on Ryan to bring forward a bill that is widely supported by immigration hawks and the White House, but that has little chance of garnering any Democratic votes in the Senate.

It also pushes the House farther from the immigration debate in the upper chamber, where moderate Republicans secured a commitment from the party’s leadership to open floor debate on DACA if a deal is not made in the next government funding bill due Feb. 8.

The legislation has been endorsed by groups that favor tighter limits on immigration, such as the Center for Immigration Studies and NumbersUSA.

The bill does not have unanimous support in the House Republican caucus, however. Some moderates have dismissed the proposal because it does not offer a path to citizenship for former DACA recipients, only a renewable legal status that includes work authorization.

Rep. Mark Walker, R-N.C., who leads the Republican Study Committee, says the bill will likely need some modifications to get to a majority of 218 votes. But he said he believes House leadership should use it as a starting point for DACA negotiations.

“The only other things that we have seen out there are pieces of legislation that, though well-intended, may garner 20 or 25 Republican votes here or there,”  Walker said Tuesday, according to CNN. “That’s why we believe this is the framework to get things moving.”