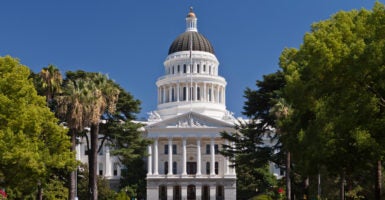 “They're driving business out of the state quickly and efficiently, and this latest move will continue to do just that,” commentator Ben Shapiro says of California state legislators. (Photo: Rolf Schulten /Imagebroker/Newscom)

Democrat state lawmakers in California say they want some businesses to give half their tax-cut savings from congressional Republicans’ tax reform package to the state.

That’s no way to create jobs and raise pay, conservatives fire back.

“It’s typical that Democrats in California see every dollar back in taxpayers’ pocket as a dollar they can steal,” commentator Ben Shapiro, himself a Californian, told The Daily Signal in an email.

“They’re driving business out of the state quickly and efficiently, and this latest move will continue to do just that,” Shapiro said.

State Assemblymen Kevin McCarty, D-Sacramento, and Phil Ting, D-San Francisco, propose a tax surcharge on companies in California “making more than $1 million,” SF Gate reported. This would force the companies to give half of their federal income tax cut to state government programs for middle-class and low-income families.

“Trump’s tax reform plan was nothing more than a middle-class tax increase,” Ting said in a written statement. “It is unconscionable to force working families to pay the price for tax breaks and loopholes benefiting corporations and wealthy individuals.

“This bill will help blunt the impact of the federal tax plan on everyday Californians by protecting funding for education, affordable health care, and other core priorities.”

The Republican tax reform package, which President Donald Trump signed into law Dec. 22, caps the state and local income tax deduction at $10,000, allowing taxpayers who itemize instead of taking the standard deduction to deduct from federal taxable income any property and income taxes paid to state or local governments.

Adam Michel, a tax policy analyst at The Heritage Foundation, told The Daily Signal in an email that the two Democrats’ proposal to commandeer some companies’ tax savings would harm California’s businesses.

“With more business taxes, they are claiming to tax the rich, but instead hurting wage growth and job creation,” Michel said. “With the other policy, they are actively seeking a way to cut taxes for the richest Californians by looking for SALT [state and local tax] workarounds. It is interesting that they want it both ways.”

McCarty and Ting propose their measure, ACA22, as an amendment to the state Constitution, which means they need yes votes from two-thirds of California’s legislature.

McCarty defended the measure in a statement provided to The Daily Signal.

“I’ve seen enough billionaire justice in the first 11 months of this presidency to last my lifetime,” McCarty said. “At a time when reckless federal tax policy favors billionaires over middle class workers, ACA 22 will help ensure that California can continue to grow and support middle class families throughout the state.”

Among other things, the tax reform package lowers rates on individuals, repeals Obamacare’s mandate for individuals to buy health insurance, increases the $1,000 child tax credit to $2,000, and reduces the corporate tax rate from 35 percent to 21 percent.