US Poised to Shatter Records for Oil Production, Gas Exports 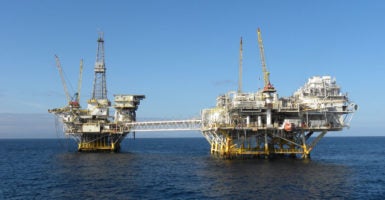 The U.S. is well on its way to becoming a net exporter of natural gas for the first time in decades after breaking an annual record for oil production, according to the latest government data.

The U.S. Energy Information Administration expects the U.S. to become a net natural gas exporter once it’s compiled all the data for 2017. The U.S. is sending more gas to Mexico via pipeline and shipping more liquefied natural gas overseas.

It’s good news for President Donald Trump’s administration, which has been promoting an “energy dominance” agenda for the past year, but the implications could be farther reaching. Unleashing U.S. energy exports has the potential to upset longstanding geopolitical and economic arrangements across the world.

The Energy Information Administration expects the U.S. to have the third-largest gas liquefaction capacity in the world by the end of 2019, behind Qatar and Australia, assuming all such projects underway are finished on time. The administration also expects a doubling of gas pipeline capacity to Mexico, furthering pushing up exports.

That news came about after the administration released its short-term U.S. energy outlook this January. In that report, the statistics agency projected U.S. crude oil production averaged 9.3 million barrels per day in 2017.

Russia and Saudi Arabia agreed in November to extend oil production cuts until the end of 2018 to keep prices up after the collapse in the summer of 2014. Though with crude now hovering around $70 a barrel, some are predicting that agreement could fall apart.