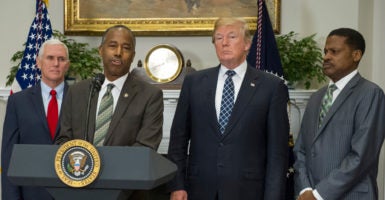 “I thank you for signing legislation to designate the birthplace, church, and tomb of Dr. Martin Luther King as a national historic park,” Carson said at the White House ceremony. “His monumental struggle for civil rights earned these places in his life, faith, and death, the same honor as Mount Vernon and that famous, humble log cabin in Illinois.”

Carson, now the secretary of Housing and Urban Development, said King’s life and death impacted him as a young person.

“This April, we will observe the 50th anniversary of Dr. King’s assassination,” Carson said, adding:

I remember so vividly that day, as a high school student in Detroit. Far from silencing his dream, death wrought him immortal in the American heart. His message of equality, justice, and the common dignity of man resounds today, urgently needed to heal the divisions of our age.

The legacy of the civil rights leader should shape the character of society today, Carson said.

“Today we honor the legacy of the man who marched on Washington, for jobs and freedom, achieving both for millions of Americans of all races and backgrounds,” Carson said. “But his legacy also calls us to remember where these ideas, equality, freedom, liberty, get their power. Our good efforts alone are not enough to lend them meaning.”

Carson reinforced King’s stance on the importance of character for equality in humanity.

He quoted the Declaration of Independence to illustrate the importance of providence:

We hold these truths to be self-evident, that all men are created equal, that they are endowed by their Creator with certain unalienable rights, that among these are life, liberty, and the pursuit of happiness.