Washington Post: We Didn’t Attack The Daily Caller, and Don’t Know Why Google Is 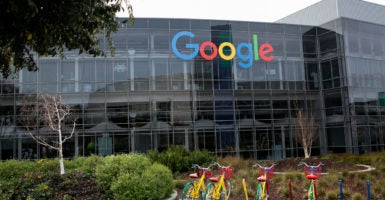 Google has been displaying fact checks for conservative publications in its results, while no prominent liberal site receives the same treatment. (Photo: Kris Tripplaar/Sipa USA/Newscom)

Google’s relatively new “fact check” feature proves there’s something fundamentally wrong with at least some of its highly influential algorithms, after an investigation by The Daily Caller News Foundation found that the widget is both blatantly biased and tremendously faulty.

The most powerful search engine in the world and a massive arbiter of online information, Google has been displaying fact checks for conservative publications in its results, while no prominent liberal site receives the same treatment. But even setting aside the exhibition of partisanship, there are other critical and profound problems with the feature.

One of the “fact checks” on The Daily Caller, which Google alleges was conducted by The Washington Post, was flagrantly misattributed and wrong. The purported “claim” was that in special counsel Robert Mueller’s investigation into Russian influence in the 2016 presidential election, “The people that have been hired are all Hillary Clinton supporters … ” The Daily Caller’s article makes no such claim. The quoted language doesn’t even appear in the piece. Worse yet, there was no language attempting to portray that the investigation is entirely comprised of Clinton donors. The story simply contained the nuts and bolts: Mueller hired a Clinton donor to help with the election probe.

But after further inquiry, the Post says while the fact check did in fact occur, it never once referenced The Daily Caller in any way, raising the question: Why was this fact check attributed to The Daily Caller and how did it end up on the sidebar, which is the first Google-offered resource for information of the publication? A digital receipt of The Washington Post’s submission to Google’s fact-checking feature shared with The Daily Caller News Foundation.

“We went back and double-checked the story and the information submitted to Google, and The Daily Caller was not mentioned at all, even in links,” Kristine Coratti, vice president of communications at the Post, said. “We clearly labeled the source, so I cannot speak to how The Daily Caller ended up being erroneously listed as the source of the fact-checked quote in this case.”

Google has since removed that single “fact check” from The Daily Caller’s “Reviewed Claims” section, while several other erroneous ones remain and are supposedly being reassessed. The Post’s article is still accessible on Google’s search platform, but only now is the claim ascribed to its rightful owner.

Coratti said they are making their own inquiries into the matter because Google’s sloppily concocted project apparently made the Post’s fact-checking column look unduly flawed, at least in this instance.

Other publications with conservative audiences were also unfairly targeted. The Federalist, for example, says it has also been essentially victimized by the feature, calling it “partisan garbage.”

“The revelation that Google is peddling demonstrably fake news, disguised as so-called ‘fact-checking,’ unfortunately comes as no surprise,” Sean Davis, co-founder of The Federalist, said. “In the case of The Federalist, Google declared as ‘incorrect’ the indisputably accurate claim that global temperatures have not risen as quickly as predicted by nearly all climate models.”

And it did so by citing as debunked a claim never made by The Federalist and using a fact check that never even mentioned The Federalist. Instead, the so-called ‘fact-checker’ used by Google to smear The Federalist specifically addressed a separate claim made by a CNN contributor nearly three years after The Federalist’s article at issue was published. Google’s new algorithmic smear operation targeted at conservative publications is a pathetic disgrace and everyone associated with it should be ashamed.

The Daily Wire, the flagship news and opinion website of conservative political commentator Ben Shapiro, was also given a “Reviewed Claims” section.

“This is absurd, insulting, and biased beyond belief,” Shapiro said. “To treat Vox.com as an utterly unimpeachable source while targeting conservative equivalents using left-wing fact-checking organizations like Snopes and FactCheck.org demonstrates a shocking level of political corruption.”

Outlets and organizations spared the scrutiny along with Vox include: Slate, ThinkProgress, The Huffington Post, Daily Kos, Mother Jones, Vice, and Salon—all undoubtedly on the other end of the political spectrum.

Occupy Democrats was the only popular blog to be subjected to the fact-check program, but that is less of a bonafide news source and more a content provider with often misleading or incorrect messaging.

“This feature was introduced to help people quickly learn more about publications. Google itself does not fact check stories. Third parties do,” a top Google spokeswoman told The Daily Caller News Foundation.

But if what The Washington Post is saying is true, then someone (or perhaps something) at some point in the process may have maliciously included The Daily Caller in a fact check that had nothing to do with the publication. It’s either that, or Google’s involved algorithms are very defective and biased—something that seems very possible. After all, as Bloomberg’s Leonid Bershidsky wrote in a recent column, “If Google Is Biased, So Are Its Algorithms.”

“We have seen a few instances where our system for associating claims with articles has some issues that will be addressed,” the Google spokeswoman continued. “Fact checks are not designed to show up more often for sites based on any political leanings.”

When asked what the criteria was for originally accepting fact-checkers when the program was first being assembled and established, Google was unable to answer. It did say that other organizations are able to join, and cited how the conservative Weekly Standard is one of the newest members of the International Fact-Checking Network, a unit of the Poynter Institute.

The Weekly Standard’s fact check “went through a vetting process” in order to be a verified signatory of the network, something that Google says it’s not a part of.

Google’s choice of the International Fact-Checking Network as its go-to source for fact-checking shows that it delegates enormous amounts of power, but wants little to none of the responsibility.

Perhaps most importantly, Google’s design of its algorithms shows how imperfect and reckless such a large company could be, even as it explores or invests in highly ambitious and futuristic projects.

Google refused to discuss the details behind the relevant algorithms, citing company policy.