Martin Luther King Jr.’s Niece: ‘My Uncle Would Have Been Very Pro-Life’ 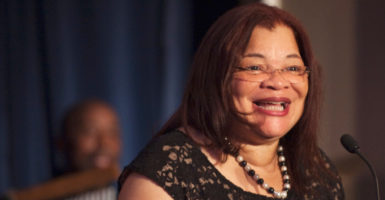 “I have been mostly impacted by his messages of unity, of racial reconciliation, of course nonviolence,” Alveda King says of her uncle. (Photo: Mary F. Calvert/Reuters/Newscom)

Martin Luther King Jr.’s niece says her uncle’s legacy as a civil rights leader has a strong impact on the pro-life movement today.

“As the niece of the Rev. Dr. Martin Luther King Jr., and I emphasize the ‘reverend’ because history has not always recorded his spiritual aspects … I have been mostly impacted by his messages of unity, of racial reconciliation, of course nonviolence, and the strongest has always been and will always be for me the agape love message,” Alveda King told The Daily Signal in an interview Friday. “One of the things that we would say [is], ‘We must learn to live together as brothers,’ and I’ll add, as sisters, ‘or perish together as fools.’”

Alveda King, director of Civil Rights for the Unborn for Priests for Life, said her uncle’s words show his commitment to respect for life.

“He said the Negro cannot win if he is willing to sacrifice the futures of his children for immediate personal comfort and safety,” King said. “Abortion, of course, forces us to do exactly that.”

King, who formerly served in the Georgia state House of Representatives and was a college professor, said she had two abortions herself.

“I actually had a miscarriage that was related to those abortions during my younger life, and so of course through the years I have become a born-again Christian, repented, and been healed and delivered, but I always think about those words from my uncle,” King said.

Martin Luther King Jr.’s widow, Coretta Scott King, received an award from Planned Parenthood in 1996 on behalf of her husband, but Alveda King says she knows her uncle would not have believed in the mission of Planned Parenthood:

His wife accepted that in his stead, because she was like me, she had accepted that agenda without understanding, I believe, but my uncle would have been very pro-life today.

The 31st annual March for Life in Washington will take place Jan. 19, and King said her uncle’s crusade for civil rights applies to the pro-life movement today.

“I really believe that if my uncle were here today, he would encourage us to find solutions to the problems, even women’s problems, and all problems, without having to do violence to babies in the womb. I am just convinced that he would agree with that,” she said.