This Conservative Lawmaker Explains Why the Embassy Move to Jerusalem Matters 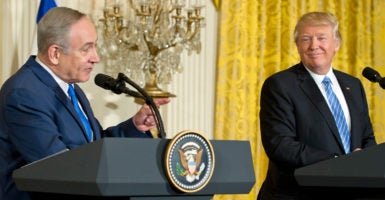 President Donald Trump’s administration is working to build peace in the Middle East, and a big part of that process is the administration's recognition of Jerusalem as the capital of Israel, one lawmaker says.   (Photo: Ron Sachs/Avalon/Newscom)

President Donald Trump’s administration is working to build peace in the Middle East, and a big part of that process is the administration’s recognition of Jerusalem as the capital of Israel, one lawmaker says.

“In the Arab world, if you are acting swiftly and with strength, that is something that makes a big impression on a lot of those leaders, even if you are acting against those interests,” Rep. Ron DeSantis, R-Fla., said in a speech Thursday at The Heritage Foundation, adding:

If you are the strong horse, that is something they respect. When you show yourself to be backing down and be a weak horse, even if you are doing it in a way and taking a position that they agree with, that causes them to wonder whether you can keep your word or not, and so I think for Trump’s personal prestige, it was important. I also think it was good for the country.

DeSantis, who chairs the House subcommittee on national security said Trump’s Dec. 6 reaffirmation recognizing Jerusalem as the capital of Israel and his order to move the U.S. Embassy from Tel Aviv to Jerusalem showed a resolve to leaders of countries in the Middle East not seen before.

In March, DeSantis went to tour possible embassy sites in Jerusalem, expecting that the president would make good on his campaign promise to move the embassy from Tel Aviv to Jerusalem.

“We identified all the sites, potential sites where you could establish an American embassy,” the Florida lawmaker said. “And I am engaged in this now about what sites they are choosing and I think that we might find out very, very soon some very positive news about one of the sites we profiled.”

DeSantis said he thinks Trump’s leadership will inspire other Middle Eastern countries to work with the United States toward stabilization in the region.

“This is a president who understands the threat posed by Iran and posed by the Iran nuclear deal,” DeSantis said, adding:

That is music to the ears of the gulf states, places like Saudi Arabia, the United Arab Emirates, they fear Iran’s influence … Do they want our embassy moved to Jerusalem? No. But are they going to cry a river over that when they need to work with us, and work with Israel, to combat Iranian influence? Of course not. Their interests are to align with the United States and with Israel to combat the Iranian threat.

Elliot Abrams, senior fellow for Middle Eastern studies at the Council on Foreign Relations, spoke on a panel after DeSantis’ remarks and said he thinks the road to stability in the Middle East is often misrepresented.

“By my analysis over the past century, 80 percent of Palestinians have been rejectionists, and 20 percent have accepted Israel, and the goal must be to expand that 20 percent to 40-60 percent,” Pipes said. “My goal is encourage an increasing number of Palestinians to recognize that the conflict is over, I am less focused on leaders … I think [if] you want a change of heart, you want a people to recognize that it is no longer worth their while to engage in, say, suicide attacks, because it is futile.”