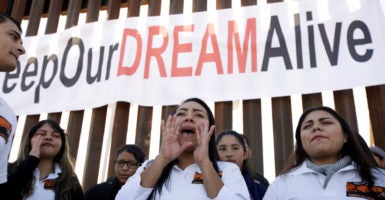 "Dreamers" sound off as they meet with relatives during a "Keep Our Dream Alive" gathering Dec. 10 at a new section of the wall on the U.S.-Mexico border in Sunland Park, New Mexico. (Photo: Jose Luis Gonzalez/Reuters/Newscom)

Giving amnesty to “Dreamers”—young adults brought to the U.S. illegally as children—would create a deficit of about $26 billion over 10 years, according to a report last month from the Congressional Budget Office.

“If we want to save taxpayers’ money, probably the best strategy is to enforce the law and encourage those here illegally to return to their home countries.”—@wwwCISorg’s Steven Camarota

In a video released Monday, the Washington-based Center for Immigration Studies details costs presented in the government report.

Steven Camarota, the center’s research director, clarifies in the video that “Dreamers”—who were allowed to stay in the country under the Obama administration’s Deferred Action for Childhood Arrivals program—are not necessarily college students, as some advocates present them.

Camarota notes that nothing in DACA, which the Trump administration is winding down in favor of action by Congress, “actually requires” that beneficiaries attend college.

“The Congressional Budget Office estimated that about one-third of the [DACA] adults … have not even graduated high school, and only about 15 percent have at least two years of college,” Camarota says, adding that “54.1 percent of households headed by native-born Hispanics access one or more of the welfare programs, and they tend to have poverty rates about twice as high as the general population.”

As Democrats and Republicans fight over the future of this population of illegal immigrants estimated at over 800,000, President Donald Trump tweeted Tuesday that his position is clear: There will be no DACA “fix” if there is no secure U.S.-Mexico border wall.

As I made very clear today, our country needs the security of the Wall on the Southern Border, which must be part of any DACA approval.

Some observers say congressional Democrats’ firm stance for amnesty could lead to a government shutdown as a Jan. 19 funding deadline looms.

“If we want to save taxpayers’ money, probably the best strategy is to enforce the law and encourage those here illegally to return to their home countries,” Camarota says in the video.