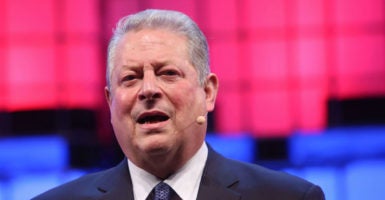 Remember when global warming meant the planet was supposed to, well, warm up? Temperatures would rise, and all manner of ecological calamity would ensue?

Me too. So it was surprising to find myself shivering, like other Americans, through several days of arctic chill and extreme cold, only to hear Al Gore blame it on global warming.

He didn’t use the w-word, though. “It’s bitter cold in parts of the U.S., but climate scientist Dr. Michael Mann explains that’s exactly what we should expect from the climate crisis,” Gore tweeted on Jan. 4.

It’s bitter cold in parts of the US, but climate scientist Dr. Michael Mann explains that’s exactly what we should expect from the climate crisis. https://t.co/6UfJ9Xxpq6

See, it’s a “climate crisis” now. But it’s hard to blame him for trying some rebranding. After all, prediction after prediction has come to naught.

But no matter: Like other Doomsday prophets, Gore just acts like the last missed deadline didn’t happen and comes up with a new one.

Which is why it’s important to remind ourselves of what Gore has said in the past.

Consider, for example, how he said global warming would cause the north polar ice cap to be completely free of ice within five years. When did he say that? Nine years ago.

So how about the evidence for the latest cold snap?

Gore’s source, Michael Mann, says the ultra-chilly temps we’ve been enduring are “precisely the sort of extreme winter weather we expect because of climate change.” As the planet warms, he says, we’ll see more cold snaps and “bomb cyclones.”

Seems counterintuitive, but Mann suggests this is because warming is “causing the jet stream to meander in a particular pattern” that leads to these cold spells.

I use the word “suggests,” however, because this is simply a theory—one that other scientists are not sold on. (Gore and the rest of the climate-crisis crowd often act like their ideas are universally accepted—that the scientific community is in complete agreement with them. But there is more room for doubt and disagreement than they care to admit.)

Just ask Kevin Trenberth, a scientist with the National Center for Atmospheric Research.

“Winter storms are a manifestation of winter, not climate change,” he recently told The Daily Caller. “The Arctic is greatly affected by climate change, and it has a feedback effect—but not in winter.”

Even if Gore and Mann are correct about the link between global warming and cold snaps, the record works against them there, too.

“The frequency of cold waves have decreased during the past 50 years, not increased,” University of Washington climatologist Cliff Mass says. “That alone shows that such claims are baseless.”

The term “bomb cyclone” is new to most of us, but it’s been around for a while. Climatologist Judith Curry recently told the Caller that it was coined almost 40 years ago by Fred Sanders of MIT, who spent a lot of time studying such storms.

Moreover, there are about 50 or 60 bomb cyclones every year, but most of them occur too far out to sea for us to notice.

Gore and his fellow travelers may have trouble admitting that they could be wrong. But their never-look-back crusade isn’t helping scientific research.

“It is very disappointing that members of my profession are making such obviously bogus claims,” Mass said. “It hurts the science, it hurts the credibility of climate scientists, and weakens our ability to be taken seriously by society.”

That’s what happens, though, when we bend facts to fit theories—and not the other way around. And remember, Al, as the old song goes, “Baby, it’s cold outside.”