Unions Give More Than $1.1 Billion to Democrats, Liberal Groups 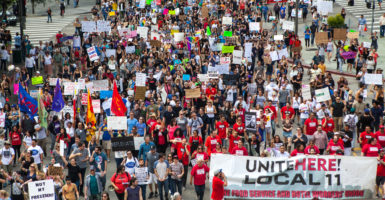 Planned Parenthood received $805,100 from labor unions over seven years and the Democratic Governors Association received $14,126,000, according to the Center for Union Facts. (Photo: iStock)

“For decades, union officials have betrayed working Americans by spending their dues dollars to advance a left-wing political agenda—without prior approval,” Luka Ladan, communications director for the Center for Union Facts, said in a statement.

“Big Labor is now the ATM of the Democratic Party, whether employees agree or not. The Employee Rights Act would hold union officials accountable to their members, not Democratic elites.”

The center said the funds were sent to liberal and anti-Republican groups without members’ approval, to organizations such as Planned Parenthood, the Clinton Foundation, and the Democratic Governors Association.

Planned Parenthood received $805,100 and the Democratic Governors Association received $14,126,000. The Center for American Progress, a policy organization known for its liberal stance, received $6,279,591.

The Center for Union Facts says such use of member dues is inappropriate, since “40 percent of union household members vote Republican in any given election cycle.”

Currently, union authorities can spend funds from dues on political advocacy groups without receiving prior approval from members, and the center says Congress needs to pass the Employee Rights Act, which would require union chiefs to procure permission from members before spending dues on  political organizations and causes.

“Roughly 80 percent of Americans—including those in union households—support the paycheck-protection provision and other [Employee Rights Act] reforms,” the Center for Union Facts says.

More than $8,000 in union dues also went to left-leaning media organizations, including Progressive and The American Prospect.

“The rights of American workers were under attack during the Obama presidency, and it is time to restore those rights and work to foster a pro-growth, pro-employee environment,” Rep. Phil Roe, R-Tenn., said May 25 in a statement when the Employee Rights Act legislation was introduced, adding:

This legislation will ensure individuals’ rights are upheld when considering whether or not they wish to join a union. The Employee Rights Act isn’t pro- or anti-union, it’s a commonsense measure to ensure a transparent and fair workplace.