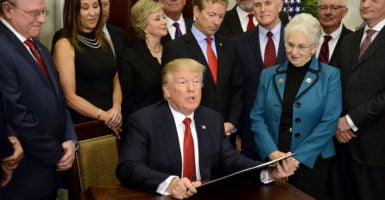 Small businesses and sole proprietors will be able to band together under a new federal rule to create employee health plans that would expand coverage options for 11 million uninsured Americans, senior Trump administration officials said.

One senior Trump administration official said during a background briefing Wednesday that the association health plans will “level the playing field” between small businesses and large corporations and provide “more health care for more people at a lower cost.”

Currently, 8 million Americans employed by small businesses and another 3 million sole proprietors, who do business without employees, don’t have access to a group health insurance plan.

Entry on the Federal Register opens a 60-day public comment period, and the rule could be implemented as early as summer, officials said.

“The main objective of this effort is to expand choices for people who do not yet have insurance and [create] more options for employers and employees to take advantage of,” Robert Moffit, a senior fellow in health policy studies at The Heritage Foundation and a former assistant secretary at the Department of Health and Human Services, told The Daily Signal.

Such association members must have a “commonality,” which could be based on region or industry, senior administration officials said on background.

For example, companies in a specific state could band together for a plan. Already, industry groups such as the National Association of Restaurants and the National Homebuilders Association have expressed support for the concept.

While association plans are targeted for small businesses, a larger corporation could join one. However, these companies already have existing plans, so there would be less incentive to do so, the senior administration officials said.

Conceptually, the association health plans would be comparable to certain union-sponsored plans, such as that of the United Brotherhood of Carpenters, in which an individual entrepreneur may buy into a larger health insurance plan, officials said.

Administration officials who briefed state leaders on the idea described them as “cautious but not antagonistic” and “intrigued.”

States will be free to regulate to ensure the solvency of the plans.

America’s Health Insurance Plans, the health insurance lobby, has warned that such plans could be prone to fraud without state oversight.

“For example, between 2000 and 2002, insurance scams through associations left more than 200,000 policyholders with unpaid medical bills totaling $252 million,” a research brief from the organization says.

However, Moffit contends this is not alone a reason to oppose the plans.

“That’s a matter of how they are governed,” Moffit said. “Medicaid is prone to fraud. Nobody is saying we should ban Medicaid. If that’s a reason for opposition, you could apply such a rationale across the board to welfare programs and food stamps.”

Participating companies will be required to have a role in governing the health plans, senior administration officials said.

Another potential point for opponents is that fewer people who are uninsured will turn to the existing insurance exchanges created under the Affordable Care Act, better known as Obamacare.

This could drive up the cost of the exchange plans, because they would have fewer participants. But Trump administration officials contend their plan will increase consumer options.

The rule will go into place administratively under an existing law, the Employee Retirement Income Security Act of 1974, known as ERISA.

—Reviews establishment of “short-term limited duration insurance,” which would not be subject to Obamacare’s expensive and comprehensive coverage regulations.

—Makes it easier for businesses to offer health reimbursement accounts, allowing more employees of small businesses to get coverage through work.

Sen. Rand Paul, R-Ky., who had opposed other administration-backed health care plans, said at the signing ceremony that the Trump executive order was “the biggest free-market reform of health care in a generation.”

Paul added that the reform, “if it works and goes as planned, will allow millions of people to get insurance across state lines at an inexpensive price.”

In a Facebook post Thursday morning, Paul said he “applauds” the new rule allowing association health plans as described in the original version of this article:

This report has been updated to include Moffit’s comments and Paul’s post.