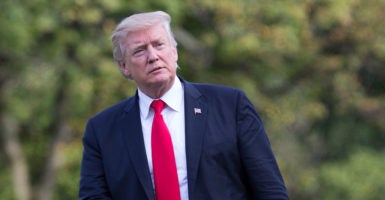 President Donald Trump created the Presidential Advisory Commission on Election Integrity in May because he believed millions of people had voted in the 2016 election illegally. (Photo: Polaris/Newscom)

President Donald Trump decided to dissolve his commission on voter fraud Wednesday, citing refusal from states to cooperate with the commission.

Trump, who created the commission in order to investigate possible instances of voter fraud in the 2016 election, is instead asking the Department of Homeland Security to review the matter, the White House said in a statement.

“Despite substantial evidence of voter fraud, many states have refused to provide the Presidential Advisory Commission on Election Integrity with basic information relevant to its inquiry,” Trump said in a statement released by the White House. “Rather than engage in endless legal battles at taxpayer expense, today I signed an executive order to dissolve the Commission, and have asked the Department of Homeland Security to review these issues and determine next courses of action.”

Trump created the commission in May because he believed millions of people had voted in the election illegally. Vice President Mike Pence and Kansas Secretary of State Kris Kobach led the commission, which previously requested the 50 states turn over pertinent information from state voter rolls, among other things.