The Media Is Upset About Trump’s ‘Nuclear Button’ Wars. Why We Should Ignore Them. 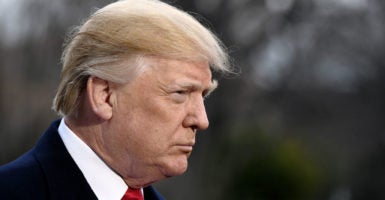 Who cares? We shouldn’t.

In his New Year’s address, Rocket Man reportedly announced he had a “red button” on his desk and he was ready to use it.

Trump tweeted back, saying that his button is much bigger.

North Korean Leader Kim Jong Un just stated that the “Nuclear Button is on his desk at all times.” Will someone from his depleted and food starved regime please inform him that I too have a Nuclear Button, but it is a much bigger & more powerful one than his, and my Button works!

The tweets themselves are actually not worthy of all the histrionic reporting and punditry that followed.

First, Trump doesn’t have a nuclear release button on his desk. In all likelihood, Kim doesn’t either. In both cases, the release and employment of nuclear weapons is not nearly as cavalier as the tweeting or the hysterical pundits suggest.

We are coming up on the anniversary of the premier of “Dr. Strangelove.” Maybe they have all seen the movie one too many times.

Second, we already know Kim has a nuclear capability. We also know his nuclear arsenal at present is not capable of doing what he claimed in the speech. Kim lies a lot. No news there.

Third, Kim’s threat was actually defensive in nature. He said he would use his nuclear arms—if attacked. That is not a new policy. Further, the likelihood of U.S. preventative military action is near zero.

So other than the colorful metaphors, what’s new here? Nothing.

Critics fret that the taunting rhetoric could lead to miscalculation and war. Their evidence for that is less than zero.

North Korea has engaged in fiery rhetoric for decades. There is virtually little correlation between what they scream and what they actually do. Sometimes they line up. Often they don’t.

Likewise, Trump has given to Kim as good as he gets on social media. There is no evidence the rhetoric per se has heightened tensions.

Indeed, there is scant likelihood that we are inevitably marching toward war. South Korea in fact just announced that North Korea has reopened the border hotline.

What has heightened tensions is North Korea’s increasing demonstration of an expanding nuclear capability. The U.S. needs a strong and consistent strategy for that, working in concert with Japan and South Korea.

That’s all that matters. The rhetorical war does not.

The Chicken Littles are starting 2018 just like they ended 2017: by obsessively focusing on the rhetorical war of words without context, and without considering the actual interests and polices of the actors involved.

That’s why the track record of journalists and analysts who focused almost exclusively on the president’s tweets, off-hand comments, campaign speeches, and statements (some of which were reported anonymously and are therefore less reliable) was pretty dismal.

The U.S. did not abandon NATO. Trump did not hand Europe over to Russian President Vladimir Putin. He did not abandon Taiwan. And he did not do any of the things that some said he would do—basing their assessments on presidential rhetoric and little more.

Sure, words matter. But in matters of statecraft, rhetoric matters in the context of action.

It might be understandable that some obsessed about the tweets a year ago, when the administration had little policy and not much of a track record. But now it’s a year later. The administration has lots of policy on the books, including a new national security strategy.

The administration has also had a year of practicing foreign policy, which so far looks more conventional overall than either of the last two presidents. What’s the excuse now for going nuclear over every tweet?

While pundits and journalists choose to be distracted by every tweet, that doesn’t mean we have to. Let’s make a resolution in 2018 to be reasonable.