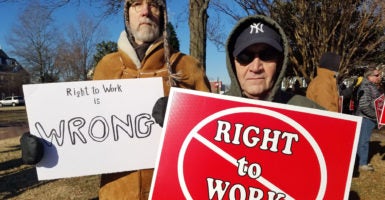 GEORGETOWN, Delaware—County officials put off action Tuesday on a right-to-work ordinance after dozens of union members turned out in force at government offices to oppose the legislation during a public hearing.

Members of the Sussex County Council asked for a formal opinion from the county attorney pending a vote that could come as early as Jan. 9.

“My No. 1 concern is that right to work lowers wages,” Kat Caudle, a member of the American Federation of State, County and Municipal Employees, told The Daily Signal.

“Workers should have the right to bargain for wages,” Caudle said, “and unions bring equality to this process.”

Inside, union members helped fill the council chamber to capacity during the first formal hearing on the proposed ordinance and watched the action with others from overflow rooms. Council members questioned speakers over the course of nearly six hours. Besides AFSCME, unions represented included the AFL-CIO, the United Food and Commercial Workers, the Communications Workers of America, and the International Brotherhood of Electrical Workers.

More than 30 speakers in a crowd of about 120 addressed the County Council, composed of five Republicans, both in support and opposition of the right-to-work measure.

Councilman Rob Arlett, who has spearheaded the proposal, asked the county’s legal counsel, J. Everett Moore, to provide a written opinion before the next meeting. Moore previously had cast doubt, in spoken remarks at an Oct. 24 meeting, on the council’s power to adopt a right-to-work law.

The Daily Signal later asked Moore whether he expected to deviate from his verbal opinion based on the state’s home rule statute. Moore declined comment. Opponents of the right-to-work bill raise their hands in the Sussex County Council’s meeting room.

‘We Want to Hear From Residents’

At the request of council members because not everyone would be able to speak, those in attendance raised their hands to indicate whether they backed or opposed the bill. The official count: 34 supported, 64 opposed.

To determine that speakers were county residents, something Arlett expressed concern about, they were asked to provide their addresses as well as names.

A total of 28 states and the territory of Guam now have right-to-work laws, with Kentucky, Indiana, Michigan, Wisconsin, and West Virginia making the move since 2012.

Delaware last month became the only state in the Northeast and mid-Atlantic with a local right-to-work law on the books. The city council of Seaford, not content to wait on the Sussex County Council to act, passed its own ordinance Dec. 12. Sussex is one of three Delaware counties.

Throughout the hearing Tuesday, union members disrupted other speakers and shouted out comments. Several times, council President Michael Vincent threatened to have individuals removed if they continued to act out.

In opening remarks, Arlett emphasized the need for a robust public hearing:

We are here today because the people in this county expect and desire jobs and to provide for their families, and as elected officials we have a responsibility. I don’t care what color shirt you are wearing, we all desire the same thing: to provide for our families. We all have dreams and aspirations. We are here to foster this.

Afterward, Arlett told The Daily Signal he wasn’t convinced the hand count was representative of his constituency, but said that with “one or two possible exceptions,” those who addressed the council were residents.

Three of the four other members of the council—Vice President George Cole, Councilman Samuel Wilson, and Vincent—declined to reveal their position in interviews afterward. Councilman Irwin Burton was not available.

Several union members and other right-to-work critics cited Moore’s previously expressed misgivings and rested their arguments on that verbal opinion.

That opinion is not part of the official record, Arlett told audience members.

“People are making reference to something that doesn’t exist,” he said.

Arlett agreed to defer action as Vincent joined him in calling for Moore to submit the written opinion.

>>> Amid Union Opposition, Right to Work Advances in Delaware County Nakeesha Armstrong, of Wilmington, belongs to Laborers Local 199, a union of construction workers based in Newark, Delaware.

Union members who spoke with The Daily Signal at the demonstration before the hearing warned that implementing right to work in Delaware would decrease wages, diminish the quality of health care coverage, and undermine the ability of unions to help workers negotiate fair compensation and benefit packages with employers.

James Maravelias, president of the AFL-CIO in Delaware, said in an interview that a right-to-work law would “lower wages” in the state.

“If right to work is such a good idea, why aren’t these states more prosperous?” he said.

While Arlett and other supporters of the proposal tout right to work as a tool to produce more choice and opportunity, the demonstrators maintained it is anti-union.

Bill Prinsket, a retired physician who lives in the Sussex County town of Bridgeville, said the proposed ordinance is “just union-busting.” He challenged supporters to “name just two companies that didn’t come here because we don’t have right to work.”

Prinsket, who is active with the Sussex County Progressive Democrats, carried a homemade sign that read “Right-to-work is wrong.”

With him was Joe Campbell, also from Bridgeville, a retired member of United Food and Commercial Workers Local 27. Campbell said the proposed ordinance would “destroy unions and make wages go down.”

Kentucky stands out in the right-to-work cause because its counties established the legal right to move forward with their own ordinances in the absence of state-level action. The 6th U.S. Circuit Court of Appeals upheld a law passed in the state’s Hardin County in a unanimous ruling in November 2016.

At least two other lawyers in Delaware have disagreed publicly with the statement by the county attorney, Moore, that the state’s home rule statute doesn’t allow local right-to-work laws and that costly litigation would follow.

Theodore Kittila, a lawyer speaking for the Caesar Rodney Institute, a free-market think tank based in Wilmington, told council members Tuesday that Sussex County has the authority to pass such a law under authority delegated by the 1970 statute.

Kittila expanded on this point, citing several cases, in a written legal opinion that is now part of the public record.

Kevin Fasic, a Wilmington-based lawyer who specializes in construction law, said during the council’s Oct. 24 meeting that the 6th Circuit Court of Appeals ruling opened the door for local right-to-work laws in Delaware and other parts of the country.

The 6th Circuit covers Kentucky, Michigan, Tennessee, and Ohio; Delaware falls within the 3rd Circuit, which has not ruled on the merits of local right-to-work laws.

If the 3rd Circuit were to rule in conflict with the 6th Circuit, the case likely would move up to the U.S. Supreme Court. But Fasic noted during the October meeting that the high court may have signaled its intention to uphold local right-to-work laws last year when it rejected a petition from labor unions challenging the Kentucky law.

Delaware state Sen. Bryant Richardson, a Republican, recounted conversations with Seaford Mayor David Genshaw in which the mayor said lack of a right-to-work law discourages businesses from locating to Sussex County, and to Seaford in particular.

In an email to The Daily Signal, Genshaw said that regardless of how the Sussex County Council votes, his city will press ahead under its own right-to-work law.

“We are under a 30-day advertisement period that started on Dec. 12 and after that, it goes into effect,” the mayor wrote, adding: “Seaford moves forward looking to win new business for the people of Seaford.”

Meanwhile, the advance of right to work in Kentucky continues to inspire action elsewhere.

In New Mexico, Sandoval County has pursued its own right-to-work legislation amid intense union opposition. The County Commission is set to vote Jan. 14 on the bill.